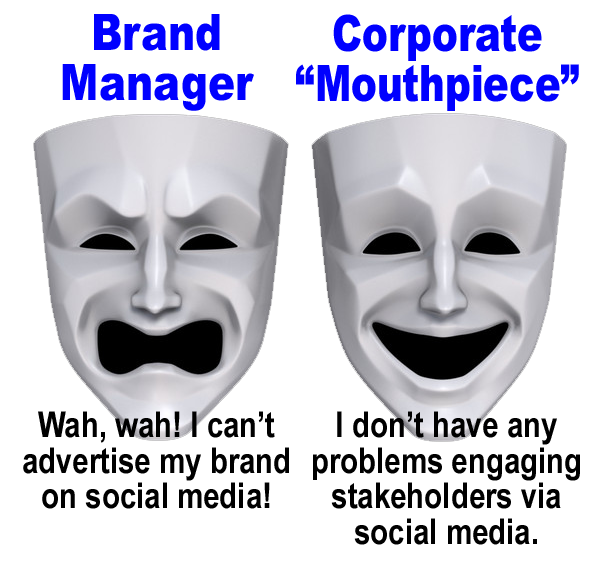 According to Rich Meyer, who asked this question on World of DTC Marketing Blog (here), the answer is the latter.

Meyer argues that “only someone from the brand team, who understands the who, what and why of the product, should be responsible for implementing social media not a mouth piece from corporate communications who every once in awhile Tweets a link.”

It’s natural that Meyer, who has a brand marketing interest and background, would favor one of his own for the job of communicating with consumers about brands. But I’ve come to realize that the distinction between pharma brand managers and corporate communications is a distinction without much of a difference these days, especially with regard to social media.

I can go on and on citing other examples.

Nevertheless, I have posted about corporate communications people who HAVE used social media to expound on the benefits of brands. Read, for example, “AstraZeneca’s Timely CRESTOR Branded Blog Post,” which talks about a branded message posted on AZ’s corporate blog by Tony Jewell. And who can forget Novo Nordisk’s branded (Levemir) tweet, which I called “Sleazy Twitter Spam” (here). The person responsible for that was Ambre Morley, who at the time was Associate Director, Product Communications at Novo.

Ms. Morley is a good case study of how pharma corporate spokespeople — often called “PR” people — are taking over the job of communicating with patients via social media. Ms. Morley started her career as a journalist and in 2011, she was named one of the top 40 under 40 public relations professionals in the U.S. by PR Week magazine and Brand Communications Marketer of the Year by PR News-PR People Awards.

Despite my criticism of the sleazy tweet and the celebrity spokespeople she has hired to represent Victoza (another drug to treat diabetes), Ms. Morley is very adept at using social media — integrated with other channels — to communicate with patients the benefits of the brands she represents. BUT she is NOT a brand manager!

Personally, I think brand managers are not people people, if you know what I mean. They tend to be “propeller heads” in that they follow rote formulas to reach the proper consumer — not patient — “demographic” or physician decile. They tend to leave the creation of messages up to outside agencies hired to do that and to execute the campaign via social media and other channels  on their behalf. I have hardly ever seen a product manager on Twitter and they tend to hide at industry conferences. Not social at all!

So, my opinion, in case you haven’t already guessed, is that corporate communications people are the right people for engaging patients via social media because they are trained communicators and are more socially engaged to begin with. That’s my opinion and I’m sticking to it. What’s your opinion?

P.S. “PR” is an antiquated term that should be retired. I think most professionals have dropped it from their job titles. Social media has been a major factor in blurring the distinction between “PR” and marketing to such a point that it is meaningless.