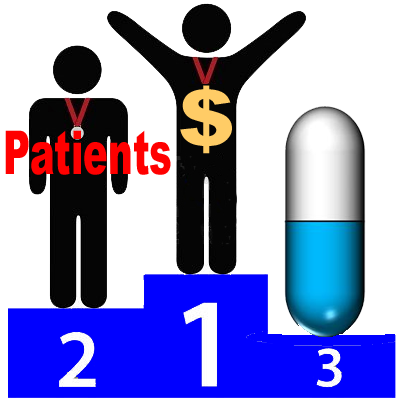 According to a Reuters article, “Leading global pharmaceutical companies have started to view their vast portfolios of older, established prescription drugs as vehicles for raising large sums of cash to fuel development of new medicines with far higher profit margins” (see “Big Pharma stands to profit by cleaning out its medicine chests“).

“The divestments could bring in more than $7 billion for Sanofi, north of $15 billion for Merck and over $5 billion for Abbott, the sources said, giving them considerable firepower to develop, or buy, promising experimental medicines.”

I can’t help but interpret this trend as another example of how big pharmaceutical companies put profit before patients despite all the hype about being more patient centric.

True, higher profits may bring new drugs to market, but new drugs are likely to serve a much more narrow base of patients; e.g., targeted biologics and extremely expensive drugs like Sovaldi, which only wealthy patients can afford (see “Sovaldi – A Cure for the One to Ten Percenters”).

But the many more millions of patients who take “older” drugs are left without the kind of “beyond-the-pill” support big pharma has been hyping up recently.

Instead, they will have to depend on branded generics whose formulations may differ from the original forms and may be dangerous — an argument big pharma often makes against generic medications. And generic manufacturers are even less likely than brand companies to offer patient support and services.

Newer generation drugs — e.g., in the diabetes area — can be better than older drugs that are jettisoned by a company like Sanofi, which has a good unbranded diabetes patient support program (see “Sanofi US Diabetes Team Wins 3rd Annual Pharmaguy Social Media Pioneer Award“). In that case the sell off does not have to mean that patients are devalued compared to profits, as long as the support programs remain in place.

But when a company sells its entire portfolio of drugs in a specific treatment area, it’s a different story: the company wants to have its cake (claim they put patients before profits) and eat it too (beef up profits without innovation).