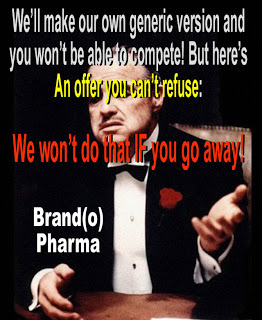 According to the  Federal Trade Commission (FTC), some brand pharmaceutical companies are imitating Marlon Brando‘s portrayal of the Godfather: They are making offers to potential competitors that they hope can’t be refused.

As reported today in the New York Times (see here) “some drug makers are using an indirect method to delay competition from low-cost generic products by promising not to introduce their own generic versions if a potential competitor delays its entry into the market.

“Instead of saying, ‘Here’s $200 million, go away,’ they’re saying they could penalize them $200 million, but they won’t, so go away,” said Jon Leibowitz, chairman of the FTC.

Finally, the report finds that some brand companies may have used agreements not to launch an authorized generic as a way to compensate would-be generic competitors for delaying entry into the market.