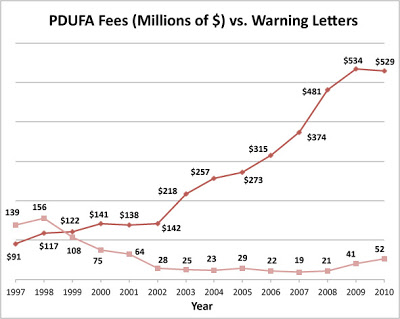 I don’t think so. My guess is that they don’t have as many sympathetic people inside FDA as does Big Pharma. Why else would the device industry and its allies have been “especially vocal this year in denouncing what they perceive as the relative length and unpredictability of the FDA’s device-approval process”?

Big Pharma on the other hand is suspected to have close ties to DDMAC.

Of course, it cannot be proved that FDA plays favorites depending on how much of the bill is paid by the companies it regulates. However, I am keeping tract of two trends:

I get the former data straight from the FDA (here) and the latter from EyeOnFDA blog, which monitors warning letters (here, for example). The following chart shows the trends:

It appears that 2010 saw a slight decrease in user fees received by FDA, but this is an early estimate that is sure to be higher in the next report. In fact, the WSJ article cited above indicates that “the Food and Drug Administration has reached an agreement with the brand-name drug industry on a five-year plan that will increase industry fees paid to the agency by about 6%.” I’m pretty sure they are talking about a 6% increase EVERY year for the next 5 years. The average yearly increase over the past 12 years has been 16.7%. Hmmm… I guess the FDA expects to be reviewing fewer new drug applications in the coming years than in the past.