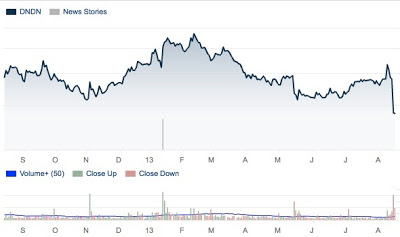 File this under “When pigs with wings fly.” Let’s do the math.

It has been reported (here) that Dendreon’s Provenge sales were off 8% in the second quarter year-over-year and 17% in the first quarter. Let’s say the 2013 sales will, on average, be 12% less than the 2012 sales. Last year Provenge sales totaled $321.5 million. Twelve percent of that is about $39 million.

According to a MM&M article (here), Dendreon CEO John Johnson remains “optimistic, because of 42 new accounts added in the quarter and because of increased consumer interest since initiation of a television DTC [direct-to-consumer] campaign March 7 for prostate cancer drug Provenge.” This campaign is a $5 million-per-quarter “targeted” DTC advertising campaign.

If we assume sales lag DTC ad views — consumers need to see the Provenge ad about seven times before they are ready to dial in to the call center — then maybe only 2 quarters or $10 million worth of DTC are allocated to make up a $39 shortfall. Which means that these ads (see below) need to realize a return on investment (ROI) of $8 for every $1 spent on advertising. That is where the flying pigs come into the picture.

View the Provenge TV ad here (embedded below) and tell me if it is likely to yield $8 in sales for every $1 spent on the ad. Keep in mind that Dendreon is charging over $90,000 per year per patient for Provenge, so only 54 new patients per quarter are needed to cover the cost of $5 million in DTC advertising. Johnson claims 42 “new accounts” were added in the last quarter, which falls short of the break-even point.

It appears that investors can do the math too: