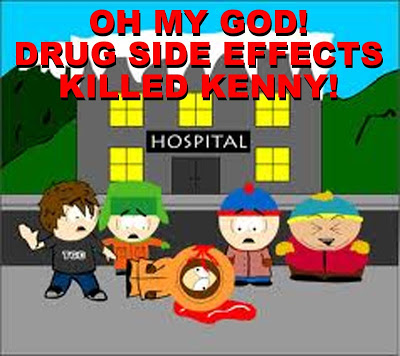 I just received a press release in my email inbox announcing the creation of “South Park Pharmaceuticals.” I kid you not!

Jason Cranford, CEO of Biotech stated, “It is becoming apparent to 21st
century Americans, that well rounded medical practice in the U.S. must
include a firm understanding of “Traditional Medicine” (also known as
“Alternative Medicine”), currently practiced by 80% of the global
population. If it weren’t the case, the U.S. Food and Drug
Administration (the “FDA”) would never have published “Guidance for
Industry Botanical Products” in 2004.”

Dean Petkanas, CEO of KannaLife added, “Having witnessed the FDA’s
openness towards the eligibility of Hemoxin, a phyto-medical compound
to treat Sickle Cell Disease, and having granted orphan designation for
the same, given today’s environment and technology, the viability and
potential of cannabinoid and endocannabinoid based therapeutics should
be well received. If nothing else, Dr. Sanjay Gupta’s documentary
‘Weed’ which aired on CNN on August 11, 2013, and the citing of the
U.S. Patent 6630507 ‘Cannabinoids as Antioxidants and Neuroprotectants’
during his interview with CNN’s Wolf Blitzer should start to straighten
out the badly distorted scientific record regarding cannabinoid
therapy.”

South Park Pharmaceuticals intends on participating in the national
initiative recently referred to as “bold and audacious”, by Francis
Collins, MD Ph.D, director of National Institutes of Health (NIH). On
April 2, 2013, this “bold and audacious” plan was revealed by President
Obama, during a joint press conference with Dr. Collins. President
Obama stated that the U.S. Government has allocated $100 million in a
public-private initiative to map the brain and gain greater insight on
“how we think, learn and remember”, and to “better understand and treat
disease ranging from autism to schizophrenia”.

I am all in favor of legalized “cannabinoid therapy” (see “Big Idea for 2013: Legalization of Marijuana. Will It Hurt Pharma?“), but with the widespread use of other  “bold and audacious” traditional medications, I envision the following “South Park” scenario: