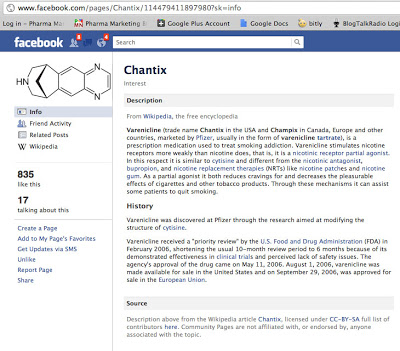 Reuters reports (here) that Chantix is “eight times more likely to be linked with a reported case of suicidal behavior or depression than other nicotine replacement products, such as the nicotine patch,” as reported by authors of a recent study (see “New study says Chantix raises suicide risks“). Here are more details as reported by Reuters:

The new study relies on adverse events from the FDA’s Adverse Event Reporting (AER) System from 1998 through September 2010. They analyzed 3,249 reports of serious self-injury or depression linked to Chantix (varenicline), GlaxoSmithKline’s Zyban (bupropion) antidepressant that was approved for smoking cessation and nicotine replacement products.

They found that 2,925 cases, or 90 percent, of suicidal behavior or depression reported to the FDA were related to Chantix, even though the drug was only approved for four of the nearly 13 years of data included in the study.

By comparison, there were 229 cases of suicidal behavior or depression related to bupropion and 95 cases related to nicotine replacement products.

The authors also looked at an antibiotic comparison group and found that adverse event reports of suicidal/self-injurious behavior or depression were otherwise “rare in a healthy population receiving short-term drug treatment.”

I looked at the data in the study and carved out the data relating only to “completed suicides” and “suicide attempts” reported in the AEs studied. I figured these were the most serious adverse events. Here’s a pie chart showing how Chantix compares with the competition: 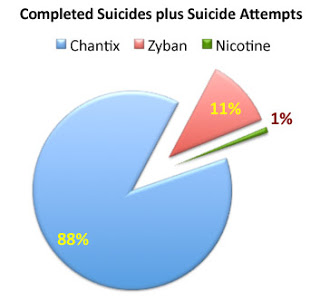 In words: 88% of reported completed and attempted suicides among this group of products were found in Chantix AERs (595 Chantix cases vs. 75 Zyban cases and 6 nicotine cases). NOTE: 77% of the AERs were submitted to FDA directly by pharma companies; 40% originated with healthcare professionals and 60% originated with consumers.

This seems to be quite an increased level of risk to accept compared to the slightly better benefits of Chantix vs. the competition.

In its promotion of Chantix (among the TOP 10 DTC advertised drugs in 2010; see “Double Dip in DTC Spending Plus 33% Drop in Internet Display Ad Spending!“), Pfizer cites studies that show 44% of Chantix users were “quit during weeks 9 to 12 of treatment (compared to 18% on sugar pill).” As the authors of the PLoS study point out, however, the picture is not so rosy after 52 weeks: “by 52 weeks a large majority in all groups had resumed smoking — only approximately 25 – 27%of varenicline [Chantix] patients had remained largely abstinent compared to 17 – 19% of bupropion [Zyban] patients and 9 – 12% of the placebo group.” No wonder the authors conclude “The findings for varenicline, combined with other problems with its safety profile, render it unsuitable for first-line use in smoking cessation.”

Pfizer is using patient testimonials in its DTC advertising and positioning Chantix against nicotine treatment products as shown in this Chantix Web site creen shot: 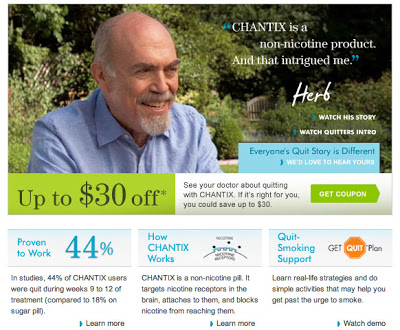 If I were “Herb,” I’d wouldn’t be so “intrigued” by “non-nicotine” Chantix if I realized that I was 88 times more likely to attempt suicide or actually kill myself while on Chantix than if I used a nicotine patch/gum/whatever. Besides, at Herb’s apparent age, stopping smoking is not likely to improve his health outcomes — his years of smoking probably have already limited his life expectancy. Why add possible suicide to the mix?

Chantix on Facebook?
P.S. I once thought Pfizer woud be smart to use social media to help people quit smoking while on Chantix (see “Chantix: Opportunity for Social Marketing Lost?“). Seeing this data, however, I don’t believe Pfizer could do it because it would be swamped by adverse event comments, especially now that Facebook requires comments to be turned on for all FB pages, including pharma-sponsored pages.

Speaking of that, I found THIS Chantix FB page (content copied from wikipedia) that does NOT have comments turned on! What’s up with that?