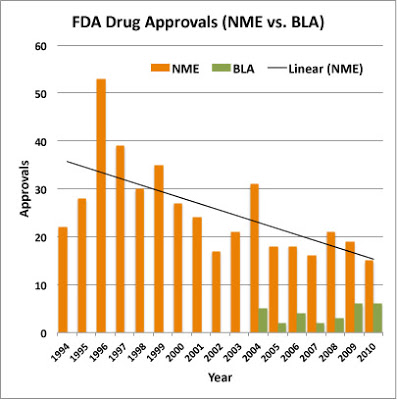 The FDA and the pharmaceutical industry are bragging about the number of “new” drugs approved in “fiscal year” 2011 (October 1, 2010 through September 30, 2011). In a report (find it on the FDA site here), FDA said it approved 35 “innovative drugs” during that period. PhRMA — the drug industry’s trade association — said that 35 “new molecular entities” received FDA approval in fiscal year 2011.

One has to be careful about how you define a “new” drug in order to compare one year’s performance to another. Also, there’s the fiscal year numbers vs. the calendar year numbers.

For example, “new molecular entity” is a well-defined FDA term that even has an acronym: NME. FDA defines a New Molecular Entity as “an active ingredient that has never before been marketed in the United States in any form.” NMEs go through a New Drug Approval (NDA) process.

In its report, FDA does NOT say there were 35 NDAs approved in FY 2011 as would be inferred from PhRMA’s statement. Instead, FDA uses the term “innovative drug,” which it does NOT define. It does, however, also refer to 35 “new drugs.” Typically, FDA would use these terms to mean NMEs.

It’s all a bit confusing to us mice trying to find the “cheese.”

Let’s look at the data on a calendar year basis.

Unfortunately, we cannot compare the number 35 for FY 2011 recently mentioned by FDA and PhRMA with the number 21 for calendar year 2010 to determine how much better the FDA/drug industry is doing. Obviously FDA wants to paint the rosiest of pictures in order to justify approval by Congress of new user fees being paid to the FDA by the drug industry to “expedite” the approval process.

On FDA’s Drugs@FDA, you can search for “Original New Drug Approvals (NDAs and BLAs) by Month,” which includes all applications approved for the first time during the selected month including New Molecular Entities (NMEs) and new biologics (note: “Not all biologics are in Drugs@FDA”). Anyway, accessing these data, I come up with 23 “new drugs” (NMEs). Or maybe it’s 25, which includes two “drugs already marketed, but without an approved NDA.” In any case, calendar year 2011 is shaping up better than calendar year 2010.

FYI, I’ve plotted the yearly data from 1994 through 2010, which clearly distinguishes between NMEs and BLAs (see chart below).

When It Comes to Social Media, Pharma Tells Patients: “Do As...