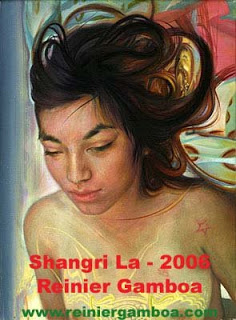 A time-honored strategy pharmaceutical companies use to keep brands alive after patent expiry is to combine one brand with another to create a combination pill. Pfizer, for example, has combined Lipitor and Norvasc to create Caduet.

I suggest that Pfizer start thinking about its Viagra erectile dysfunction (ED) franchise. Viagra will go off patent as early as 2011.

One specific suggestion I have is to combine Viagra with Chantix (indicated for smoking cessation). I call this combination “ChanGra-La,” which is pronounced virtually the same as Shangri-La, the mystical, harmonious, earthly paradise and utopia described in the novel Lost Horizon.

“What,” you may ask, “could justify such a combination?”

According to an Italian study mentioned in a BMJ news item (“Erectile dysfunction may be an early sign of heart disease, suggests new research“), of 860 middle aged men, 40% of men who had erectile dysfunction (ED) smoked heavily, compared with 4% in the control group. Another study provided a link between ED and heart disease: “A pilot study by Greek researchers evaluated the incidence of asymptomatic coronary artery disease in 26 men with erectile dysfunction and found that nearly a quarter (23%) had coronary artery disease confirmed by angiography,” reported BMJ.

In other words, if a pill like ChanGra-La can simultaneously help middle-aged men quit smoking AND obtain an erection, that therapy would have an extra-added benefit of preventing future heart attacks. A virtual “Shangri-La” for Pfizer!

There would be added benefits as well. Chantix, for example, has some notable “side effects,” such as vivid “dreams” or hallucinations that may heighten a man’s sexual experience. In fact, many dreams associated with Chantix are sexual in nature (see “Chantix Californication Dreamin’: Viagra II“). This should not surprise anyone who knows that Chantix works by competing with nicotine to stimulate the brain’s pleasure center.

One problem I foresee is that both Viagra and Chantix are not approved to be taken in daily doses or for a long period of time. Pfizer, however, should easily be able to find a work-around. After all, there is now a daily dosage form for Cialis, which competes with Viagra.

The Chantix portion of ChanGra-La is a bigger problem. It is recommended that Chantix be taken for only 12 weeks, whereas ChanGra-La would have to be taken indefinitely to be effective. I’m not sure how to get around this — maybe have an alternating 12-week cycle of ChanGra-La with Chantix followed by a cycle of Chantix replaced by a placebo compound (eg, sugar), etc.

Obviously, such a regimen would require not just a pill, but also a support “program.” Pfizer already has some related experience from its Chantix “GETQUIT Support Program.” For ChanGra-La, I suggest a “GETHARD Support Program.”

“But hasn’t Pfizer recently announced it would no longer invest in cardiovascular drug research?,” you might ask.

Yes it has. But the beauty of the ChanGra-La strategy is that it requires virtually no R&D, just a little trial at worst.

Approval by FDA should be a cinch. There’s probably no middle-aged man out there who would not like to take ChanGra-La and since most FDA advisory committee members and reviewers are men…case closed!