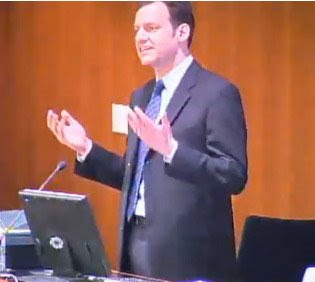 “I was also wrong about disclosure,” said James Stein, MD at a University of Wisconsin conflict of interest seminar (see video here). Dr. Stein, a cardiologist, was proud to list all his drug company affiliations on his CV in the 90’s and admitted he liked the money he got from being on their advisory boards and speakers’ bureaus.

“I really felt that if I stood up in front of a crowd and said these are my disclosures, look how honest I am, that I was really managing conflict of interest. The literature tells me it [has] the opposite effect. Although its laudable to disclose your relationships [with drug companies] … it actually has the perverse effect. The recipient of your information becomes more trusting. Also, professionals who disclose become more biased. That’s the perverse effect of disclosure.”

The good doctor drew chuckles from the audience when he said “The solution isn’t disclosure. If you are doing something that’s wrong or unethical, don’t disclose it. Just don’t do it!”

That’s the problem, of course, physicians who disclose do not think they are doing anything wrong or unethical. It’s the one who DO NOT disclose who believe they have something to hide. In both cases, Dr. Stein’s words are falling on deaf ears.

Listen to the whole 16 minutes here.

Counter Detailing — Pissing into the Wind or Profitable Endeavor?