It may have been Einstein who defined insanity as doing the same thing over and over again and expecting different results. When I analyze a recent survey of pharmaceutical marketing executives, I believe that definition fits them to a T!

The headlines read: “Pharma execs expect to increase use of doctor-focused social media” (here), but when you dig down into the data, you discover that there’s practically nothing many of these guys don’t think they will spend more money on when it comes to communicating with physicians — except, that is, print journal advertising.

The data I speak of comes from a Booz & Co survey of 156 senior industry executives from Europe and the U.S. You can find that survey attached to this post. Below is the relevant chart of the data: 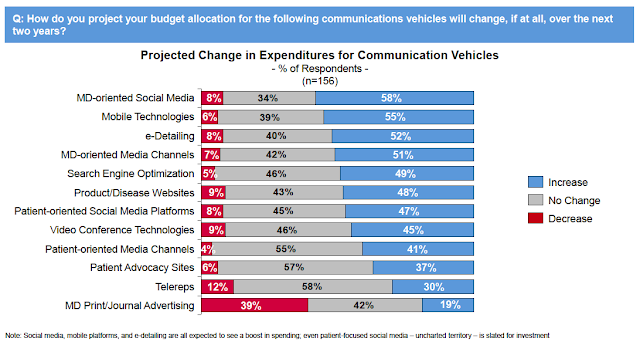 First of all, 156 is not a significant N and the error here must be at least ±20 percentage points error. Thus, the 58% of execs who say pharma will increase spending on “MD-oriented Social Media” could actually be 38% (ie, less than a majority). Secondly, these data are probably skewed in favor of executives working in the EU. Booz only says “All survey participants work in either the United States or one of the big five European Union countries, and they represent a diverse range of pharmaceutical companies.”

Whatever! These VPs (15%), directors (52%), and managers (20%), most of whom are responsible for a product portfolio (46%) or a specific brand (33%), are an optimistic bunch. Practically speaking, except for the case of print advertising, NONE of these guys think spending will decrease in the next two years for any “communication vehicle!” This despite the belief of many of them (43%) that the sales-force time for their products will decrease.

Obviously, to believe otherwise is to question your existence on this planet!

Strangely, however, 68% of the execs agree or strongly agree that “the current commercial pharmaceutical model is broken and needs significant repair.” And practically 0% believe the model is NOT broken!

Isn’t part of that model exactly what they say will see increased spending in the next two years? I mean, most of the “channels” in the chart above are part of the current “model,” no? There’s nothing new there.

In other words, these guys think the model is broken, but they are going to spend more on the model in the next two years! That’s the definition of insane pharma marketing!

Medium vs. Message vs. FDA