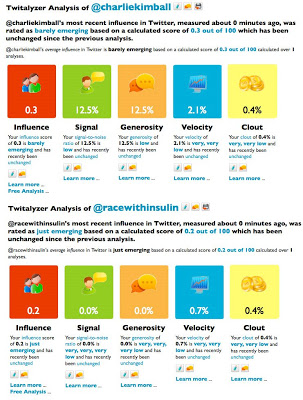 Last week I compared the personal Twitter account of racecar driver and diabetes patient Charlie Kimball (@charliekimball) with Novo Nordisk’s Levemir-branded Race with Insulin Twitter account (@racewithinsulin), which supposedly features tweets made by Charlie. In that post, I noted that the latter account is a distorted mirror of the former. In fact, it appears that Novo Nordisk is rewriting a select number of Tweets from @charliekimball to create the Race With Insulin account (see “Novo Nordisk Selectively Copies & Edits Kimball’s Tweets“).

It’s no surprise that Novo Nordisk would edit Charlie’s Tweets. After all, Novo is a regulated drug company and is responsible for the post made on its Twitter account.

But is Novo sucking the life out of Charlie’s Tweets? A few of Charlie’s more personal Tweets, for example, never make it over to Race With Insulin. These include: “In Denver airport on my way home. No one has ABC and the race on. It’s all golf! Bleh.” and “Just had a great mountain bike ride. 1 hr. 40mins. 20 miles. 1850 feet ascended. Lots of fun!”

What we are left with is a string of Tweets about Charlie arriving at airports, cleaning his suit, and taking his Levemir. Novo’s editing, in other words, doesn’t leave much that would make us interested in following Charlie on @racewithinsulin.

Is this a case of marketing “sucking the life” out of a person? (see “Was Nalty’s Fart Video the Straw that Broke Merck’s Back or was it Some Other Video?“).

That’s my personal opinion based on my qualitative analysis. There is, however, another more quantitative analysis available. The site TwitChuck.com, which bills itself as “an intelligent way of looking at spam and following on Twitter,” uses “use a collection of metrics ranging from social interaction, to friends and followers, spam rules” to score each Twitter account you feed into it.

I decided to compare the TwitChuck scores of @cahrliekimball and @racewithinsulin to see if there were any significant difference between them. Here’s what I found this morning (click on the image for an enlarged view): 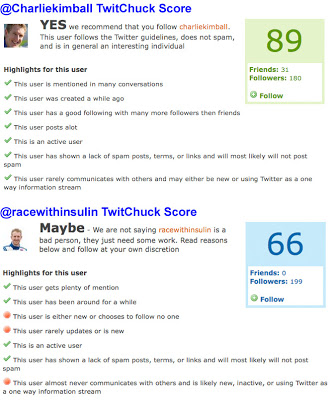 Another quantitative Twitter tool is Twitalyzer.com, which evaluates the activity of any Twitter user and reports on relative influence, signal-to-noise ratio, generosity, velocity, clout, and other useful measures of success in social media. The Twitalyzer scores for @charliekimball and @racewithinsulin are shown below (click on image for an enlarged view):

The two main reasons why @racewithinsulin scores lower than @charliekimball is that the the former is decidedly less social than the latter. Novo allows @racewithinsulin to follow no one, does not allow direct messages from any one, and does not communicate with any one. It is, as TwitChuck says, “using Twitter as a one way information stream.” Obviously, this is a safe way to use Twitter’s advantages without having to deal with handling adverse event reports or off-label comments from followers.

@racewithinsulin is evolving. For one thing it is adding new followers, although many of them appear to be PR and marketing professionals rather than diabetes patients. On the basis of this alone, I expect its socres to increase over time.

However, if Novo Nordisk wishes @racewithinsulin to evolve into a inspiring resource for diabetes patients, it will need to rethink its editing policy to allow more interesting Tweets through from Charlie. I won’t even get into the two-way conversation thing! It may just be too big a regulatory nut for Novo or any other pharma company to crack.

Pharma R&D Succumbs to the Dark Side