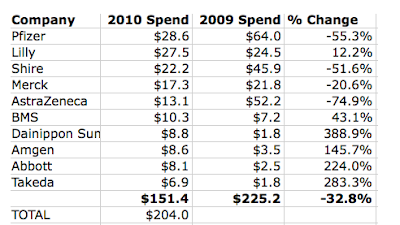 The industry spent $4.34 billion on DTC advertising in 2010. This is the lowest spend since 2004, when the industry spent $4.43 billion. There are many reasons cited for this decrease but the “main reason they’ve cut back is, like many other companies and consumers in the recession and tepid recovery, they simply have less to spend,” according to the AdAge report. 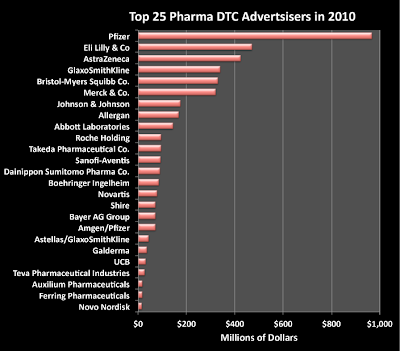 LIPITOR was the #1 most-advertised Rx drug in 2010. In 2010, Pfizer spent a whopping $272 million on DTC advertising for LIPITOR, which is scheduled to go off patent in November, 2011 (see chart below; click on chart for larger view). 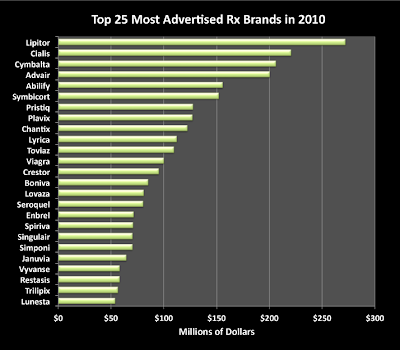 I don’t have data for 2011, but I notice a lot more LIPITOR ads these final days before the end of LIPITOR’s market exclusivity. My doctor also recommended I switch from generic pravastatin to LIPITOR, assuring me that it will go generic by the end of the year. Some of that DTC advertising must have reached my doc, who previously had recommended CRESTOR, which spent only a minuscule $95 million on DTC advertising 2010! Maybe, however, it was the speaker fees Pfizer paid my doctor that changed her mind (see here).

As I have often noted, digital display ad spending is only a minor fraction of pharma’s overall DTC budget. In 2010, digital represented only 4.7% of total DTC spending (see chart below). 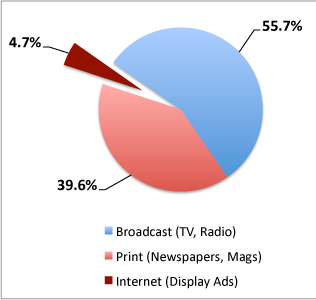 Here’s is how much the top 10 Internet display advertisers spent in 2010 compared to 2009:

The spending of these top 10 advertisers represent 74% of the total $204 million spent on Internet display advertising by the pharmaceutical industry in 2010. These companies spent 33% less on the Internet in 2010 than they did in 2009. It’s likely the same is true for other companies as well.

Again, I do not have data for 2011 Internet spending by pharma. I do know, however, that a representative of Google just recently said “pharma needs to leverage the Internet” and that “pharma was not considered a key client by Google because of pharma’s low spend” (see here). That suggests to me that 2011 will NOT shape up much better than 2010.

If you look at the number of drug industry conferences devoted to digital marketing and the record attendance at some of these conferences, however, you might believe there is a turnaround in the works. Only time will tell.

Should the Tax Deduction for DTC Advertising Expenses be Eliminated?