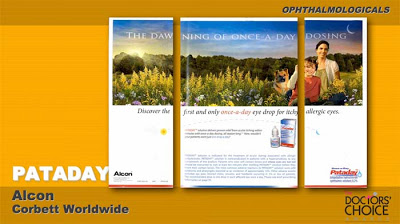 While I often report on pharmaceutical print ads targeted to consumers (see, for example, “Print DTC: How Does It Measure Up?” [free]) I don’t have direct access to print ads that doctors are subjected to (ie, professional print ads that appear in medical journals). But now — thanks to the folks at the Association of Medical Media (AMM) — I have a chance to view the drug ads that doctors like the best. 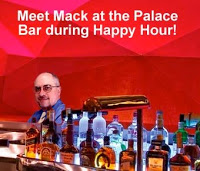 Yes, dear reader, I’m off to yet another awards ceremony in New York — The Doctors’ Choice (TDC) awards ceremony at the Palace Hotel on September 24, 2008. If you are there (see the ad in the left hand column), be sure to say hello and perhaps meet me for a drink at the fancy-schmancy hotel bar.

Thanks AMM for the invite, free lunch, and especially the preview of the ads that you sent me.

This will be about the 4th advertising awards ceremony I have attended during the past year or so. In April, I attended MedAdNews Manny Awards and in October, 2007, I attended MM&M’s swank awards dinner at Tavern on the Green (see “MM&M Award Winners Announced at Gala NY Event!“). I’ve also attended a DTC Perspectives awards dinner. So far, MM&M wins hands down in terms of partying!

TDC awards are based on doctors’ opinions rather than ad agencies patting themselves on the back. Doctors are asked to rate ads on the following attributes:

So, which ads won TDC awards? You can find the list here, but I will show you a few below.

My Favorites
No award ceremony would be complete it seems without a Rozerem ad or its agency Abelson-Taylor winning at least one award! I’ve written about this product and agency ad naseum, so I won’t go into all that now except to say how quickly things change. The doctors who voted for this ad and other ads in the TDC contest did so in 2007. At the time Rozerem might still have enjoyed a 5% market share amongst sleep aids. Now, however, I am not sure it is even on the radar screen of any physician. Maybe it won this award by default — ie, the only entry in the “psychiatrics” category?

Remember, increased script writing as a result of seeing the ad is NOT one of the attributes by which this and other ads were judged. 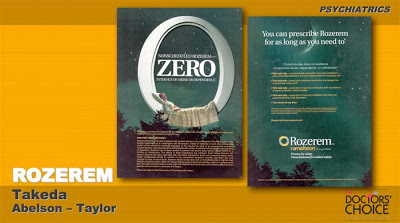 Another ad by Abelson-Taylor also won an a TDC award: Natrecor. The ad is shown below (click it to enlarge). 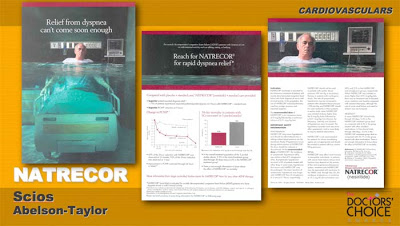 I don’t know how the sales of Natrecor have been, but I do know that the FDA slapped Scios’ wrist for putting the ad on a mouse pad that its sales reps handed out to physicians (see “The Natrecor Waterboard Tortured Tchotchke“). FDA said the image “evokes the concept of a sedentary hospital patient drowning” and cited the mousepad for “inappropriate reminder labeling.”

I note that Scios is not a signatory of PhRMA’s new code on interactions with healthcare professionals, which calls for the end of such gifts to the physicians beginning in January, 2009 (see this Pharma Marketing News article).

This particular ad — aside from having a memorable image that caught the attention of the FDA — is in a category of physician ads that I call Detail Aid Ads. Detail Aid Ads are chuck full of data and charts and graphs just like the printed detail aids that sales reps use when talking to physicians. At least that is how detail aids are supposed to be used. However, at the recent PharmaMed conference, at least one expert disparaged the detail aid as a dinosaur that should be allowed to go extinct. I think this is the only Detail Aid Ad among the TDC award winners.

Another technical-looking ad that won a TDC award is an ad for Colazal, shown below. 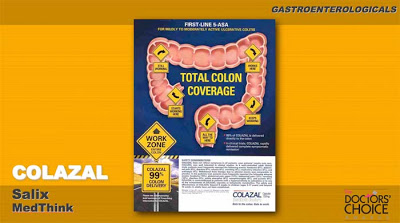 This one is my real favorite of the bunch. It doesn’t depend on capturing your attention with offbeat imagery and images of suffering patients — just plain anatomy, which probably plays well with gastroenterologists, who always see their patients as colons and/or anuses.

Speaking of suffering patients, the Cymbalta winner takes the cake in that category! 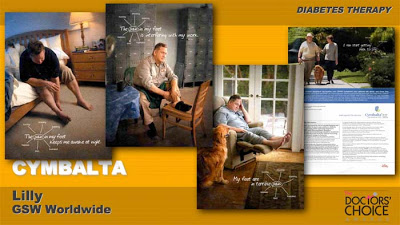 I really, really feel sorry for this guy! Not because his feet hurt, but because he has to suffer alone, without any contact with other humans (a dog doesn’t count)! But after taking Cymblata (see last panel) he no longer is alone! What an amazing drug! I have noted previously that Cymbalta was the world’s wonder drug (see “The Cymbalta Buzz Machine is at Full Throttle!“).

At least this professional ad is on-label whereas some Cymbalta DTC ads are not, IMHO (see “eGAD! How I Learned to Stop Worrying and Love Cymbalta!“).

The last two TDC award ads in my collection — Vigamox and Pataday — resemble DTC print ads. Both are Alcon drugs and both ads were created by Corbett Worldwide. 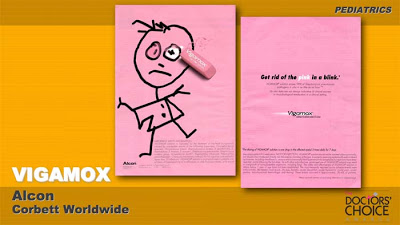 I may have seen DTC print ads for these products, but I am sure the DTC ad budget is minuscule. BTW, the Vigamox ad was featured in the Manny Award ceremony because Corbett Worldwide won an Agency of the Year award at that event.

There’s a lot I do not know about professional print ads. I hope to learn a lot by attending The Doctors’ Choice award luncheon and meeting the people responsible. Stay tuned for an update.