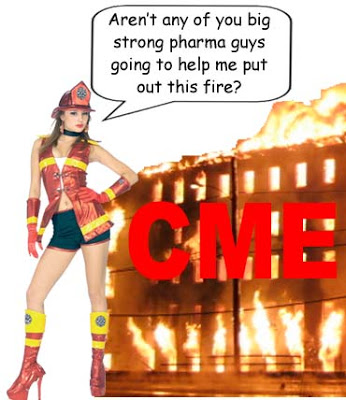 I awoke today at 4 AM to catch an Amtrak train to Washington, DC so that I could attend a meeting hosted by the Center for Medicine in the Public Interest (CMPI) on industry support of continuing medical education (CME). The organizers of this meeting were Peter Pitts and Robert Goldberg, both of whom contribute to the DrugWonks blog.

Since I am currently hosting a survey entitled “Is Pharma Sponsored CME Biased?” — which you can respond to here — I felt that I needed to attend this meeting to get a “balanced” and unbiased view of the issue.

Actually, none of the presenters claimed to be unbiased. In fact, a point often made by the panelists — many of whom are physicians — is that it is impossible to totally eliminate bias in CME. It is just as likely, the panelists claimed, that non-industry sponsored CME is as biased as is industry-sponsored CME.

George Lundberg, MD, Editor-in-Chief of the Medscape Journal, lead off the meeting and cited surveys that the vast majority of physicians — maybe 80 or 90% — like industry-sponsored CME and only 10% of physicians claim industry-sponsored CME is biased. Dr. Lundberg did not reveal details about the studies he cited, but he is an honorable person who once was Editor-in-Chief of JAMA. So, I’ll take his word for it.

Other panelists also pointed out that eliminating industry sponsorship of CME will not end bias. “One does not equate to the other,” said Leonard Bielroy, MD, Chair, Department of Asthma and Immunology at the University of Medicine and Dentistry of New Jersey.

Lundberg ended his presentation by comparing the CME industry in the US with the investment banking/insurance industry, which is currently undergoing a financial meltdown. Whereas the latter is “murky and broken,” said Lundberg, the former is transparent, not broken and in no need to be fixed by the government. There is absence of accountability and regulation in the financial industry, whereas in the CME industry there is an “umpire” — ACCME, which has “worked well in the past and will work even better in the future,” said Lundberg.

Michael Weber, MD, Professor of Medicine, Downstate Medical Center, Brooklyn, NY, who moderated the panel after Lundberg, set the tone of the meeting by claiming the drug industry was in a “total funk” when it comes to standing up to the censorship that critics are trying to impose on physician education. Weber believes that the drug industry should actually be mandated to sponsor CME as a way to educate physicians about the proper use of drugs.

Which actually is not such a bad idea, if, for example, the pharmaceutical CME money went into a general pool to be distributed to recognized and accredited CME providers. Sort of like PDUFA funds earmarked for FDA review of DTC advertising. Peter Pitts, President of CMPI, called any such scheme “pdoofass.” That about ended that discussion thread before it even began.

The rhetoric was ratcheted up several notches by Thomas Stossel, MD, Professor of Medicine, Harvard University. Stossel likened the situation facing industry-sponsored CME to a “six alarm fire” and suggested that it is important to get at the “arsonists.”

Stossel named Merrill Goozner of Gooznews.com as one of these “arsonists.” Other panelists suggested that a good many industry-sponsored CME “arsonists” may be their colleagues in physician associations and medical schools that are calling for an end to pharma-sponsored CME.

Stossel, as well as other presenters, ridiculed all the fuss about “disclosure” of conflicts of interest and said it amounted to “inquisition by disclosure.” Physicians, it seems, do not like to submit their slides for review and several panelists called the practice “totalitarianism” and “tyranny.” Meyer actually brought up Munich, Germany, and claimed physicians had more freedom in that birthplace of the Nazi Party than they do here in the good old USA! Then Stossel suggested that the “victims should stop being victims” and start defending themselves. Another Nazi-era reference! He topped it off by citing a 2006 JAMA article that brought on a “jihad” of “falsification” and “fabrication.”

By this time I was getting turned off by all the rhetoric and name calling. I was at a loss to understand how CMPI intended to win over Congressional aides in the audience by hinting that their bosses were arsonists and terrorists! Also, I did not wake up at 4 AM, spend over $175 out of my own pocket — probably the only one in the room to do so! — on trains and taxis and waste a whole day just to hear insults and anecdotal evidence that industry-sponsored CME was good for medicine. I was promised that this meeting would be an “evidence-based evaluation” of the issue. As the morning wore on, I heard scant evidence.

Then, Marissa Seligman, PharmD, SVP, Pri-Med Institute, came up the mic and actually presented some evidence. Her company is a MECC — a medical education communications company that creates and delivers industry-sponsored CME. Like other MECCs, Pri-Med surveys physicians who have taken their CME courses to gauge outcomes — has the CME changed physician prescribing behavior, for example. It also asks physicians whether or not the CME program was biased. The data that Seligman presented on physician attitudes towards commercial support of CME say that 57% believed industry grants had a positive impact on the CME, whereas 24% said it had a negative impact and 19% said it was neither positive nor negative.

She also cited data that claimed that 92% of physicians disagree that industry support of CME should be banned. That was based on only 200 physicians who participated in Pri-Med CME programs. Not scientific, but good enough for Lundberg, I suppose.

My advice to CMPI and their MECC allies is to do a meta analysis of all the outcomes studies done by CME providers and make their case based on the data rather than name-calling and rhetoric. I don’t think data will sway the “anti-pharma zealots,” “arsonists,’ or “jihadists,” but it may lead to a positive story in the New York Times and the other media that have “mercilessly beaten up” the pro-industry people.

BTW, I will expand upon the coverage of this meeting in the October issue of Pharma Marketing News (subscribe now to get this issue free).