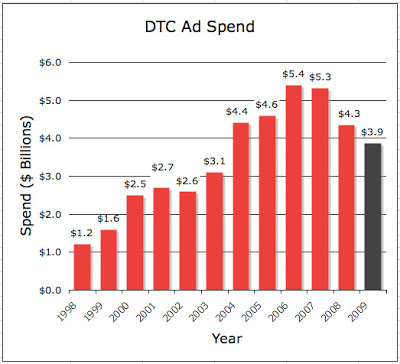 As reported in DTC Insights published by DTC Perspectives, “According to preliminary data issued by The Nielsen Company today, the spending for DTC ads fell dramatically in Q4, which led to an 18.4% decline for full-year 2008 results. The “reported” dollar total for 2008 is $4.344 billion, compared with $5.325 billion in 2007. The 2008 total for DTC ads is comparable to the level of DTC spending in 2004.”

The source of these data is the Nielsen Company: “U.S. Ad Spending Fell 2.6% in 2008, Nielsen Reports“. The Pharmaceutical sector’s decrease was even greater percentage-wise than the Automotive sector, which experienced a 15.5% drop in ad spending in 2008. Data does not include Internet or B-2-B spending.

New Media Ad Spending Decreased for All Industries
According to Nielsen: “New media was also hit by the tough economic climate. Internet ad spends dropped 6.4% and Network TV took a 3.5% hit. Nevertheless, television continued to be the dominant medium for advertisers, with 60% of all ad dollars spent on Network, Cable, Hispanic, or Spot TV.”

It appears than when times get tough, advertisers tend to stick to “tried and true” media, or at least the media they are most comfortable with. Many pharmaceutical marketers, therefore, may feel it’s a bad time for them to experiment with new media like social networks.

I have revised my now infamous DTC Spend Trend chart shown below to include this revised 2008 number:

The black bar represents my estimate of what DTC spending will be in 2009 based on a recent survey (see “DTC Spending Will Be Decimated in 2009, Experts Say” and “The Future of DTC Advertising“).

I’ll keep my estimated 11% decrease for 2009 DTC spending for now, but if the general economy in 2009 is worse than in 2008, we can expect to see an even greater decrease.