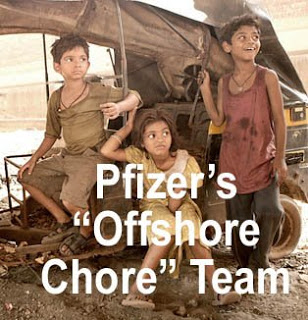 “Now is the time for all good men to come to the aid of their country.”
— Typewriting exercise.

“Typewriting” has been replaced by “keyboarding,” but should American jobs be replaced by “slumdog” jobs in India?

Take Pfizer. It’s buying up other US companies, pfiring thousands of American employees and outsourcing “tasks” to Indian companies who hire cheap “slumdog” laborers to work on these tasks while Pfizer managers sleep!

According to BusinessWeek Magazine, “Pfizer now lets [David Cain, an executive director for global engineering] punt .. tedious and time-consuming tasks [creating PowerPoint slides and riffling through spreadsheets] to India with the click of a button. PfizerWorks, launched early last year, permits some 4,000 employees to pass off parts of their job to outsiders. You might call it personal outsourcing.” (See “Outsourcing Tasks Instead of Jobs“).

“Pfizer itself announced some 8,000 job cuts in January,” reported the same BusinessWeek article. I’ll bet some of those people that Pfizer has “laid off” or will lay off know how to do “web searches, number crunching, and other tasks” that Pfizer is now farming out to India. I am sure some of them who are in-between jobs and off unemployment insurance will be happy to work the night shift on these projects even if it means getting paid only a fraction of what they used to get paid while employed.

I’ve seen at least one story on the Nightly News of a former executive who had a salary of $75,000 now working as a janitor for near minimum wage! Maybe — just maybe — he gets health and other benefits as a perk. But those benefits are rapidly disappearing.

Kerry Ramsey said in a comment to the BusinessWeek story, “Rather than outsource this work to India why doesn’t Pfizer outsource that work here in the U.S., to help this economy?”

Nasonex Bee May Usher In a Whole New Way to do...