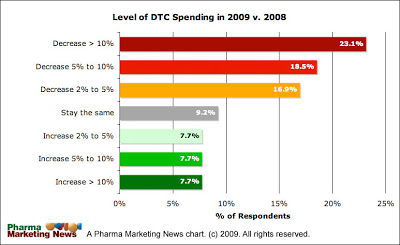 In his response, Dale said:

Well, the publisher of Med Ad News is no Rupert Murdock, but opinions of people do seem to make a difference to that publication, which made a big deal out of a survey of 104 of its subscribers in the lead article of this month’s issue (“Traditional media is alive and well (for now)”).

Unfortunately, although Med Ad News said the study showed an “increased number of marketing professionals [who] indicated that their DTC budget for 2009 has decreased,” they gave no details such as percentage of the 104 who said that nor how much their budgets decreased.

Meanwhile, the following chart (click for an enlarged view) shows the results so far of the survey of Pharma Marketing News/Blog readers (N=65):

Of course, this is not a scientific study and the respondents probably do not include many product managers who would know something about actual budgets, but there’s a certain amount of wisdom in this crowd, despite what Dale Taylor thinks. (You can take the survey and add your wisdom here.)

IN FACT, there’s QUITE a bit of wisdom in this crowd. According to a study by Cegedim Dendrite, the percentage of marketers who say they will decrease their DTC spending rose to 58% in 2009, up from 28% in 2008. If you add up the percentages in my survey chart the result is 59%, which is about as close to Dendrite’s 58% as you can get!

“The decrease in spending would be due to budget cuts and a shift to more targeted direct-to-patient efforts,” says eMarketer (see Drug Marketing Drops).

Dale agrees: “I am, however, confident that many brands will be doing a lot more with a little less when they start making their DTC communications more targeted, more insightful, more creative, and less dull. Relentless pressure to improve ROI will make this inevitable.”

I only ask that question because of a disturbing remark made by an expert quoted in the Med Ad News article I mentioned above: “A critical mass of new patients is obviously needed to keep the media machine going. If a media budget is too low, or target audience too small, it may be extremely challenging to keep the media wheels greased.”

To this person, DTC budgets are just grease for the wheels of the marketing machine. Marketing for marketing’s sake!

This is what happens when there’s too much focus on dollars and cents ROI.