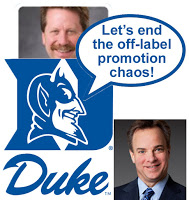 The report authors want to end the off-label drug promotion (or, as they call it, “communications”) “chaos” by creating an FDA-sanctioned “clearing house” or third-party organization that would accredit (“rank, score, or grade”) off-label drug communications.

The the Duke-Margolis Center and the authors of the report have ties to the FDA.

Mark B. McClellan, the Center’s head, is a former FDA commissioner appointed by president George Bush. McClellan resigned after a very short term involving a controversy over Plan B. The FDA deleted or threw out all of McClellan’s e-mail and written correspondence on the subject (read “Plan B FDAgate“).

Peter Pitts, former FDA Associate Commissioner for External Relations, is one of the authors of the Duke report.

Dr. Robert Califf, a former Duke cardiologist, is the current nominee for FDA commissioner. Although Califf is not directly associated with this report, he has been critical of FDA in the past, something he has tried to put behind him (read “Califf Removes His Name as Author of Scientific Paper Critical of FDA“). An FDA Commissioner with strong ties to the Duke health policy community is very likely to approve the recommendations of the Duke-Margolis Center for Health Policy, IMHO.

You can read more details regarding this proposal below.