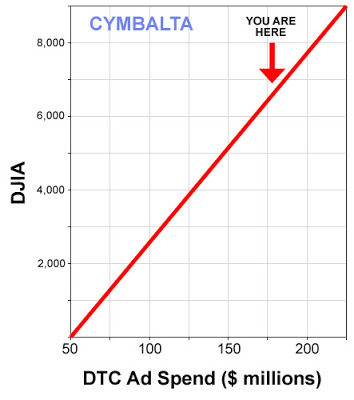 Good news for the pharmaceutical industry: the more employees you and other companies “pfire” (see “Not Since 1975 Have We Seen Job Losses Like This!“), the more drugs you will be able to sell and the less advertising you will have to do to sell them!

That’s the takeaway from an article in yesterday’s AdAge, which said:

“The economy, it appears, is keeping us up at night, according to a new ‘Sleep In America’ poll out this week from the Washington-based National Sleep Foundation. Some 31% of respondents said they are losing sleep over the dismal economy and their own financial situation.

‘The pattern certainly suggests’ the economy is a factor, said Amy Wolfson, a professor at College of the Holy Cross in Worcester, Mass., and one of five members of the poll taskforce. ‘There are worries about the economy and that can certainly lead to insomnia … so, yeah, it certainly makes sense that the [prescription] numbers would be up.'”

“prescriptions are up despite a dramatic decrease in marketing — in the case of sleeping aids, by hundreds of millions of dollars. According to figures from TNS Media Intelligence, spending on sleep-aid Ambien CR fell from $190 million in 2007 to $150 million in 2008 while outlays on Lunesta plunged to $107 million in 2008 from $271 the prior year. Rozerem alone cut spending by $100 million from $140 million in ’07.”

It’s a win-win-win for the drug industry! Well, maybe, and only if you sell sleep aids like Ambien and Lunesta or anti-depressants like Cymbalta.

Can we really interpret this data to claim that direct-to-consumer (DTC) advertising has no effect on consumer demand for drugs?

If Ambien did not advertise, I could walk into my doc’s office and ask for Lunesta instead because I remembered the moth and not the rooster. (Forget about Rozerem. That beaver was dead a long, long time ago, well before the recession in the job market began.)

The sleep ad market has calmed down after the shootout for market share began a few years ago. It’s only natural that ad spending in this category would decrease from its peak during the shootout.

The AdAge article also cites an increase in anti-depression drug sales even though advertising in that class decreased, according to the article.

Effexor is an old drug and it’s natural that its budget for DTC advertising would decrease over time. Cymbalta, on the other hand, is a new drug and has new indications.

So, I don’t believe these numbers can be interpreted to mean that DTC advertising does not lead to increased sales of brand name drugs.

The recession won’t help the sales of ALL drugs. Sales of Pfizer’s smoking cessation drug Chantix, for example, may be hurt. In stressful times, people are not likely to give up habits such as smoking that decrease their stress. What should Pfizer do? Will Pfizer throw in the DTC towel and figure it’s impossible to fight the habit in tough economic times? Nah! It has to believe in DTC’s ability to increase demand. Therefore, I predict we’ll see more Chantix DTC ads. They’ll have to be more creative though. I suggest they take on the recession directly in the ads. I invite the Pfizer ad agency to contact me for more details on how that could be done.