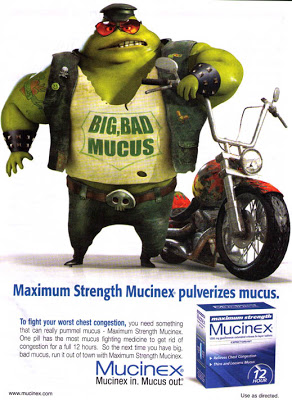 Have you seen the new Mucinex print and TV ads where “Big Bad Mucus” and his biker friends ride into town on their “hogs” scattering the citizens in their path? The print ad from this week’s Newsweek magazine is shown below.

The new character is much more ominous than the previous Mucinex ad icon “Mr. Mucus,” who was just a poor family guy looking to set up a home for his new wife. Later, after an appropriate period of time had passed so that we didn’t think Mrs. Mucus was pregnant before being married, little child mucuses were added to the family, which got blown out the nose and mouth when Mucinex entered the scene.

According to a 2006 story in USA Today (see “He may be gross, but he can sell“), this is how the original Mr. Mucus character came into being:

Creating just the right character to personify mucus was no easy task. The computer-generated animated image required just the right touch to make him gross but not too gross.

The final look: pot-bellied, no hair, a full set of teeth and a raggedy outfit consisting of a sleeveless undershirt and plaid pants held up by suspenders. (The happy couple dresses up for the wedding, however.)

“The ads were done in such a light-hearted manner that struck a chord in a humorous way,” Arnett says. “He’s a disgusting, loveable icon, but at the end of the day, we’re pretty happy where we ended up.”

Well, “loveable” seems to have been thrown out the window — or blown out the nose. “Big Bad Mucus” is a snarling biker with a skull and cross bones belt buckle who leads a gang of unruly bikers.

Perhaps focus groups “loved” Mr. Mucus too much and thought Mucinex was the bully. Perhaps Reckitt Benckiser hired a new ad agency. Whatever. “Big Bad Mucus” is the new guy in town — until he gets thrown out by Mucinex, that is.

Although “Big Bad Mucus” is not as “loveable” as “Mr. Mucus,” the new icon may have been inspired by two other, loveable, icons: John Travolta (who played an amiable biker in the movie “Wild Hogs”) and Shrek. 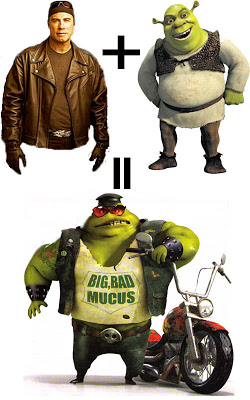 What do you think? Am I right?

It was impossible to find an image of either Travolta or Shrek in which they were snarling. Of course, the creative people at the Mucinex ad agency would have no problem adding the snarl to create “Big Bad Mucus” out of an amalgam of Travolta and Shrek.

Method Acting for Real Patients Who Play Themselves on Pharma YouTube...