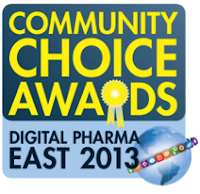 The winners of the first Community Choice Awards, organized by WEGO Health, ExL Pharma, and the Digital Health Coalition, were announced last Friday (18 October 2013) at the Digital Pharma East Conference in Philadelphia.

Melissa – whose Twitter handle is not a rip-off of my famous “Mack Attack” (read about it here) – accepted the award for Best Branded Campaign, i.e., Gilenya, a treatment for Multiple Sclerosis (MS).

In a previous post I noted that the @GilenyaGoUSOnly Rx Branded Twitter Account has a problem with its side effects sidebar (read about that here). I had other criticisms of @GilenyaGoUSOnly such as its lack of patient support/information when FDA issued a warning letter regarding a serious adverse event involving Gilenya and the fact that it engages in “reminder” ads.

These issues should be of concern to patients, including the activists who voted for Gilenya as the “Best” branded campaign. But patients may not be looking at the glass half-empty as I do, but at the glass half-full (see “Empowered patient have to question themselves as well“).

Another WEGO Community Choice Awards winner that I have criticized in the past is the unbranded Merck Engage campaign. I said “Merck May Know How to ‘Engage,” But It Certainly Does NOT Know How to ‘Disengage’!” because I had a problem “opting out” of receiving further emails from merckEngage. And although Merck was trying to “engage” with me via email, the email came a bit late; I had forgotten why I wanted to “engage” with Merck in the first place. Unfortunately, I did not have a chance to discuss these issues with Melissa at the awards ceremony.

So a couple of pharma winners are not perfect. That should not prevent the recognition of their efforts by patients and their advocates. The advocates, however, should ask important questions as I have and give feedback to Merck and Novartis about how to improve their campaigns. They might start with the issues I mention above. These issues should be of importance to patients who want to (1) learn more about side effects and (2) be sure their privacy rights are respected.

Novo Nordisk’s Race With Insulin was a contender for the Best Unbranded Campaign. Unfortunately, this is a fully branded campaign and should not have been in the Unbranded category (see, for example, “Charlie Kimball – Novo’s Branded Spokesperson – Makes Expensive TV DTC Debut“).

You might say, unbranded, branded! What’s the problem? For one thing, patient activists should be aware of the difference. Also, it’s not fair to the really unbranded contenders to compete on a confused playing field.

It seems to me that patient activists and advocates need to be more educated about the pharmaceutical industry. Perhaps some activists are too interested in monetary support from pharma to see what the emperor is really wearing.

The The Impotence of Proofreading