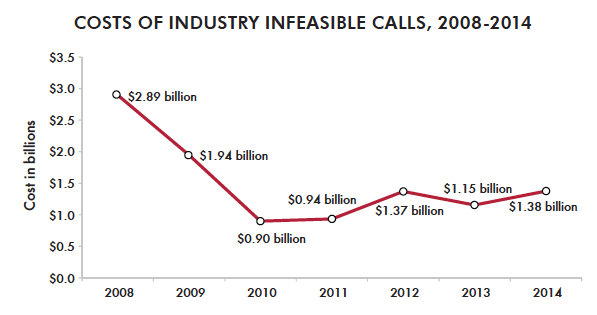 According to the spring 2014 AccessMonitor™ report from global sales and marketing consulting firm ZS Associates, pharmaceutical access to physicians continues to decline. Only 51% of physicians/prescribers now allow access to sales reps, down from 55% in 2013 (see chart):

Even among traditionally pharma-friendly prescribers (e.g, dermatologists), access is down dramatically as illustrated in this chart:

The decline in access continues despite the downsizing of the pharma sales force by one-third since 2008. But, the downsizing has actually helped pharma deliver better sales calls.

By cutting down on all those “infeasible” sales calls. A call is considered infeasible by ZS Associates if a “best-in-class” sales rep can’t deliver it. The number of infeasible sales call has leveled off after dropping precipitous from 2010 to 2008 when the pharma sales force was cut by one-third.

I don’t know how ZS Associates calculates this cost, but by reducing the sales force by 30,000 reps, these data indicate that the industry has saved about $2 billion annually. Which works out to $67,000 per sales rep, whatever that means.

You can download an executive summary of the report here.