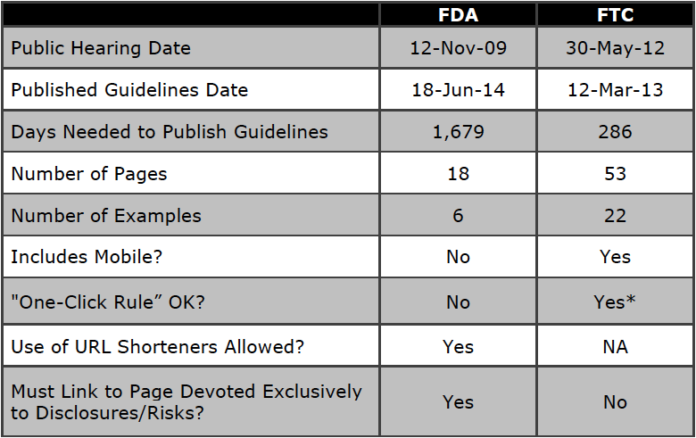 One of FDA’s Ten Commandments — the FIRST one, in fact — states:

Several people have asked me, “John, what other agency could pharma worship before FDA?”

The Federal Trade Commission (FTC) also regulates product advertising. The FDA, however, as per its first commandment, lords it over prescription (Rx) drug advertising, whereas the FTC regulates advertising of other health products, including supplements and over-the-counter (OTC) drugs. FDA, however, regulates what is claimed on the labels of OTC drugs.

FDA and FTC regulatory guidelines are often very similar. In fact, when the FTC issued its guidelines for promotion via social media in March, 2013, I thought FDA’s social media guidelines would be similar to FTC’s.

The following table is a handy side-by-side comparison of the two approaches (FDA v. FTC).

FDA’s guidelines were criticized on many levels including how long it took the agency to publish the guidelines after the public hearings and the paucity of examples included in the guidance document.

FTC did a much better job explaining its guidelines in 53 pages (vs. FDA’s 18 pages) that included 22 examples (vs. FDA’s 6 examples).

What about the “One-click Rule?”
FTC allows disclosures to be accessed one-click away from the ad under some circumstances.

“When it is not possible to make a disclosure in a space-constrained ad,” says FTC, “it may, under some circumstances, be acceptable to make the disclosure clearly and conspicuously on the page to which the ad links.”

The Hypocrisy of the “Risk-Only” Landing Page
The FDA requires that a social media (e.g., Twitter) ad include a link to a landing page that is “exclusively devoted” to disclosures of important safely information. Although the FTC does not require this exclusivity, it does have several “rules” for how disclosures must be presented on the page.

My question is this: Can the pharma industry push the FDA to get its social media guidance more in line with FTC’s thinking on the issue of linking to (additional) disclosure information? That is, eliminate the requirement that the disclosure landing page be “exclusively devoted” to drug risks.

This would allow more information to be immediately available to the consumer without the need to include TWO links in the limited-space ad. This is precisely the argument made by one anonymous drug industry insider who said “wouldn’t it better serve the public interest if the ‘risk’ link does not go to an unbalanced and negatively misleading risk-only page, but to something Medication Guide-like, starting with the most important safety information, but also including what the drug is used for and how it should be used? Isn’t that the desired support for non-misleading and balanced communications?” (see FDA’s Limited Character Guidance is “Totally Hypocritical,” Says an Industry Insider).

Is Pfizer Arrogant and Superior?