The second day of the FDA hearings on DTC was essentially more of the same as the first day. There were, however, a few nuggets here and there that I feel are “blogworthy” enough to include here. I left early, so I can only cover the morning presentations.

Alex Sugarman-Brozan, representing a group called Prescription Access Litigation, looked like a radical on the program guide and he did not disappoint. His group claims to represent consumers in class action lawsuits against pharmaceutical companies and targets deceptive marketing. He was against any DTC advertising that did not include the complete product labeling. This includes TV ads, which the FDA says are OK without the full labelling as long as “adequate provision” was made for consumers to access the labeling in other media — i.e., print and the Internet. In other words, Mr. Sugarman-Brozan (I hate people with 2 last names! Not really. I just hate wasting my time on unnecessary typing!) is against the adequate provision regulation that allows DTC on TV and radio.

Pre-Approval of DTCA by FDA
On the other hand, SB made several interesting observations that should be taken seriously, one of which involves pre-approval of DTC promotions by FDA. Pre-approval has been recommended by PhRMA in its voluntary guidelines and several pharma companies pledged to submit all their DTC ads to FDA before running them (Astrazeneca on Tuesday “proposed a mandatory requirement for pharmaceutical companies to submit all direct-to-consumer advertising to the U.S. Food and Drug Administration for review prior to its use,” according to a Reuters news story).

SB’s observation is that the FDA has 40 staff members to view all drug promotions, including DTC and promotions to health care professionals. SB claimed there were 53,000 such promotions in 2004. That means each FDA reviewer would need to review 5.5 promotions per day. This, of course, would be impossible. Although these numbers may be inflated (e.g., include all promotions, not just DTC), the FDA would be hard-pressed to review all DTC promotions before airing in a timely fashion. To do so would require additional staff and funding. Another presenter suggested that a new type of “users fee” be imposed on the industry to cover this extra expense. In other words, these critics would set up a DTC promotion approval regime similar to the drug approval process. Yeah, that’ll happen! I expect the drug industry would like that as much as the drug approval process (think DELAY; this is a major sore point with the industry. According to FDLI SmartBrief,”Pharmaceutical firms now need an average 8.5 years to move a new product through clinical and approval phases, according to a study by the Tufts Center for the Study of Drug Development.”)

Nevertheless, SB recommended that FDA review all DTCA, including broadcast, print and online ads. He also recommended the following:

FDA should seek power to impose civil monetary penalties. He criticized the current method of issuing warning letters and likened it to British Bobbies shouting out “Stop! Or I’ll shout stop again” as they pursue bad guys with no threat of force. The audience had a good laugh at that one.

[AN ASIDE: Generally, I found DTC critics much more entertaining at the hearing than supporters. They were lively presenters and often had multimedia accompaniment. The supports were dry and boring for the most part. Jeez! Why do they leave all their marketing skills at the office! Maybe if they were more entertaining and even had a few sound bites like the above I would write about them in this blog more often. However, it is not my goal here to be balanced and present all views no matter how entertaining they may be.]

End FDA Chief Counsel review of all enforcement letters. Although SB doesn’t think FDA warning letters are effective, he nevertheless suggested that these letters not be impeded by FDA’s chief counsel review. This issue was discussed in a previous post to this blog (see “WLF Watches FDA Watching Drug Ads“).

Regulate Disease Awareness Ads. There was much discussion of this type of promotion, which is non-branded. Most of the discussion was about how effective these ads are in driving people to seek medical help — a key benefit of branded DTC cited by proponents (J. Patrick Kelly from Pfizer reported on a study that claimed to show that branded DTC ads were much more effective at getting people to see their doctors than non-branded disease awareness-type ads. FDA referred to this study over and over again when questioning critics, raising it’s conclusion to the level of dogma or conventional wisdom. I have not yet examined the study but at least one critic testifying at the hearing dismissed it).

SB suggested, however, that the disease awareness ad may become the “new reminder ad” and serves merely to drive consumers to branded promotions in other media such as the Internet. He cited a Pfizer TV ad on depression, which did not mention any product name but urged viewers to visit the web site depressionhelp.com, which is clearly a site that promotes Zoloft, Pfizer’s antidepressant drug. On the site, Lorraine Bracco, the actor who played a psychiatrist on the HBO show The Sopranos, says “[my doctor] put me on Zoloft (link to zoloft.com). I was also on therapy… And let me tell you something…getting treatment was the best thing I’ve ever done for myself.” 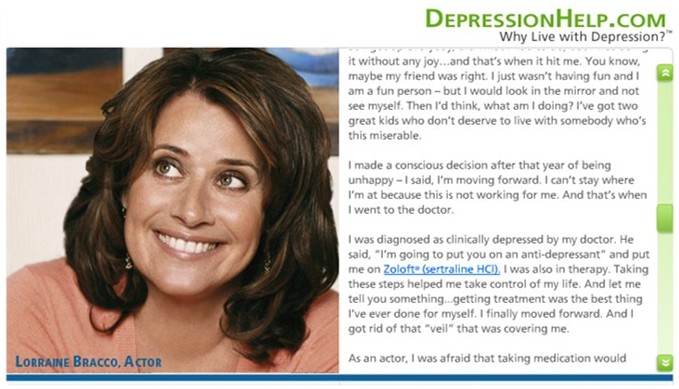 [I include her photo to add some visual interest. She looks great, huh? The photo must have been taken a long time ago, because I saw her on a recent Law and Order show and she looked really fat and ugly! (I should talk!) Maybe she wore a fat suit on the show and it is a recent photo and she went on the South Beach diet and shot up a lot of Botox after the show. Nah! I think it’s an old photo. I wish I had more photos of me when I was younger! If only I knew that I’d be a blog celebrity way back then!]

SB proposed that such disease awareness ads — where there is a link to branded promotion on the Internet — should be regulated by the FDA as if they were product ads, The two, in other words, should be regulated as one ad. This is a quite interesting idea and bears looking into some more.

But not now, not here. I have to get to work. More on the FDA DTC hearing later.