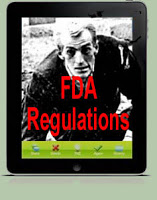 In testimony at the March 21, 2013 House Subcommittee on Oversight and Investigations regarding Health Information Technologies: Administration Perspectives on Innovation and Regulation, Christy Foreman,
Director of FDA’s Office of Device Evaluation, Center for Devices and Radiological Health, “promised” that FINAL guidance regarding the regulation of Mobile Medical apps (MMAs) will be released by the end of the current fiscal year; i.e., before October 2013 (read her words here).

There’s been quite a lot of fear mongering regarding the types of health apps that FDA will seek to regulate. PhRMA, for example, agreed with an editorial that suggested the FDA will soon require apps such as medication prescription renewal reminders and blood glucose level tracking functions to be regulated as medical devices (see “Mobile Regulatory Fears: PhRMA Raises an Alarm“). Foreman specifically excluded such apps in her answers to questions from Rep. Henry Waxman (D-CA):

Near the end of the hearing, Rep. Morgan Griffith (R-VA) asked Foreman if the FDA could regulate these kinds of apps “if it had a change of heart.” Foreman reiterated that the FDA would only regulate apps that were considered medical devices under the FDA Act and only if “strong safety signals” indicated that the FDA was not regulating a device appropriately:

In her written testimony, Foreman said:

“FDA recognizes the importance of implementing a balanced, transparent approach that fosters the development of health IT solutions and innovative products like mobile medical apps, while ensuring appropriate patient protections. Like traditional medical devices, mobile medical apps may in some cases present significant health risks to patients. FDA seeks to strike the right balance by providing a risk-based, focused approach to the oversight of a small subset of mobile medical apps that present a potential risk to patients if they do not work as intended. Consistent with this balanced approach, FDA would not regulate the sale or general consumer use of smartphones or tablets.”

You can see the entire hearing and download the testimony here.

New Numbers Show that #Pharma Does Spend More on Marketing than...