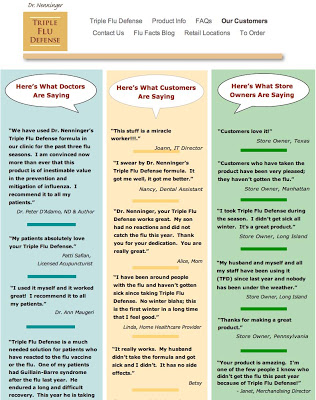 What I found interesting about this letter is that it addressed an issue more serious than the typical “false claims” letter that Rx pharma companies sometimes receive. This letter pointed out that a product (“Triple Flu Defense”) was being “promoted for conditions that cause the product to be a drug” subject to FDA regulation. “Triple Flu Defense,” however, never submitted a new drug application to the FDA for marketing approval. Hence the letter.

FDA pointed out that several unsubstantiated efficacy claims were made, such as:

In addition, said FDA, the website “includes claims in the form of testimonials that establish the intended use of your product as a drug. Examples of these testimonials include the following:

When I accessed the Triple Flu Defense Web site (here), I expected to see that it had been taken down in response to the FDA’s waring. After all, the FDA sent the letter via UPS overnight on December 14, 2011 and demanded action within 15 days. But it’s almost a month later and all the claims are still there (see screen shot; click to enlarge and read the claims).

In contrast, when Rx Web sites are cited for violations by the FDA, the offending pages are gone by the time you learn about the letter!