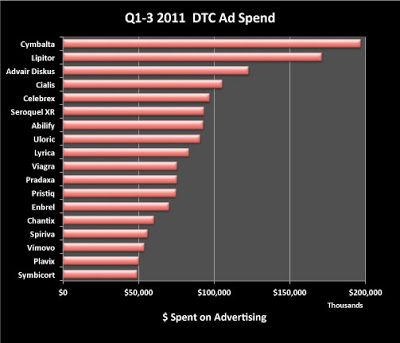 2011 is shaping up to be a good year for pharma direct-to-consumer (DTC) advertising — that is, broadcast advertising, NOT Internet advertising.

This is good news for TV, which raked in 64% of the broadcast DTC ad dollars during that period and magazines, which raked in 30%. Newspapers and radio shared the scraps left over.

What about Internet DTC spending?

Recall that in October I reported that a representative of Google said “pharma needs to leverage the Internet” and that “pharma was not considered a key client by Google because of pharma’s low spend” (see “Double Dip in DTC Ad Spend!“).

Of course, Google is concerned primarily with search advertising, which is often said to represent about 40% of the industry’s total online advertising spending. But what about online display ads, which are major sources of income for health portal sites such as WebMD?

The Wall Street Journal reported that WebMD’s Chief Executive Wayne T. Gattinella resigned, and the health-website operator “called off a search for a buyer as it braces for weaker financial results this year. A key issue, the company said, is pharmaceutical companies holding back on spending as they deal with expiring drug patents.” (see “Dip in Drug Ad Spending Leads to WebMD Woes“).