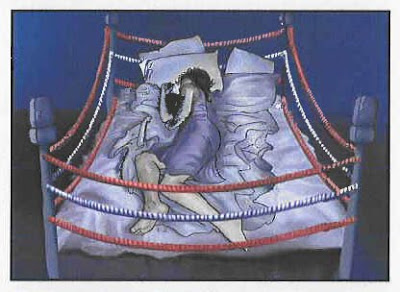 The ad in question is the so-called “Boxing Bed” ad, which shows a sleepless woman tossing and turning in a bed that is also a boxing ring. Here’s a panel from the storyboard that was submitted to the FDA on November 19, 2009, about the time the ad first ran on TV:

In other words, the ad appeared way back in 2009 and the FDA is just now sending Sepracor a warning letter after having the storyboard in its possession for 7 months! Of course, the ad has run its course and Sepracor and Lunesta have long left the ring. But the FDA still went after them with this sucker punch.

What is FDA demanding? “DDMAC requests that Sepracor immediately cease the dissemination of violative promotional materials for Lunesta such as those described above. Please submit a written response to this letter on or before June 23, 2010, stating whether you intend to comply with this request…”

I imagine a grin on Ms. Grim’s face as she sits in her office somewhere in Malborough, MA reading Newcomer’s letter. “Yes,” says Grim, “we’ll cease airing that commercial three months ago and I will write this ‘newcomer’ a response as soon as I return from my vacation on the Cape. Meanwhile, I’ll have my staff frame this letter to add to the collection hanging behind my desk.”

BTW, while searching Google for this ad, I found an interesting Lunesta paid search ad as seen here:

This is the first time I have ever seen a drug ad that talks ONLY about side effects! I assure you that the ad linked to the official Lunesta Web site and NOT a lawyer’s class action Web site. Perhaps Sepracor is trying to atone for running those infamous “badWords,” which violated FDA regulations (see Lunesta, Google, and “bAdWords”).