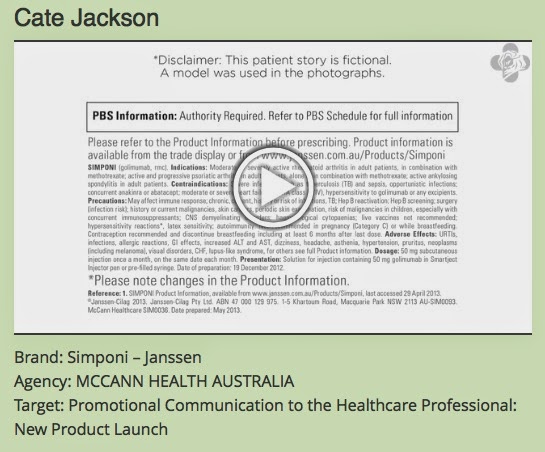 Although none of the 517 entries from 35 countries in the Pharma category at the recent Lions Health “Festival” was a grand prix winner (read “Pharma Advertising is So Bad It Has No Big Winner at Cannes Lions Health 2014“), one campaign did win a Gold Award: Janssen’s Simponi’s “Cate” campaign.

This campaign represents a category that many #LionsHeath tweeters waxed poetic about: patient storytelling. It’s all the rage today in pharma and healthcare advertising.

Here’s how McCann Health Australia, the ad agency who created this campaign, described it:

“When you treat RA with Simponi, it only takes about ten minutes, once a month. This means Simponi is the treatment you hardly even notice. Great news when often RA is burden enough to a patient. We wanted to capture the non-invasive nature of Simponi in our creative. So we set out to capture a month of a Simponi patient on film and show how non-invasive it is. Literally. This film features a typical RA person – female between 50 and 60. It shows hundreds of moments (selected from over 10,000 shots captured by our photographer) that represent a month in the life of a Simponi patient, Cate Jackson. Amongst the hundreds of shots, there is only one that features Cate injecting herself with Simponi. The shots are run together so quickly in the film, it is near impossible to spot the moment that treatment takes place. This technique/idea highlights the fact that Simponi is very non-invasive, so you’ll hardly notice. After watching a collage of her life, a super tells us in the many shots/moments we just watched only one featured Simponi. The super then challenges: ‘Bet you hardly even noticed. Neither did Cate Jackson.'”

Dr. Rita Charon, author of “Narrative Medicine,” presented at the Festival. Her message? “Healthcare is for truthful, authentic, discovering accounts of self.” Unfortunately, the story of “Cate” is not that.

Did you catch the phrase “a typical RA person” in the agency’s description? As revealed by the hazy disclaimer at the end of the  video, Cate Jackson is NOT an “authentic” patient: “This patient story is fictional. A model was used in the photographs.”