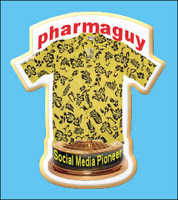 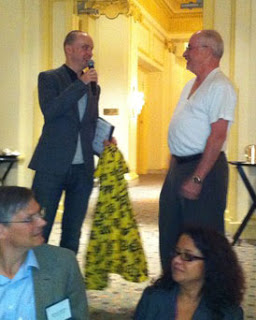 I have finally gotten rid of that seriously yellow Hawaiian shirt that has symbolized the Pharmaguy Social Media Pioneer Award and my involvement with pharma’s slow march into social media over the past year.

Alex Butler (see http://bit.ly/AlexButler), Digital Strategy and Social Media Manager at Janssen UK, graciously received the “shirt off my back” at lunch yesterday during the 4th Annual Digital Pharma East conference. That’s Alex, the shirt, and my disrobed self pictured on the left. Thanks to Steve Woodruff (@swoodruff) for the photo documenting this historic event.

@pixelandpills: Aaaand the shirt comes off…congrats to @Alex_Butler for his @pharmaguy Digital Pioneer Award win. We think you should frame it. #digpharm

@GaryMonk: Well done mate! RT@Alex__Butler: Thnx to @pharmaguy for giving me the famous shirt 2 look after for 1 yr re: social media pioneer award….

As I mentioned in this Pixel & Pills video interview by the lovely Sarah Mclellanny (@sarahmclellanny), I based my choice partially on input from respondents to an online survey. About 65 people participated and the results are shown in the following chart. Each respondent was able to vote for more than one candidate; see the list of ALL the 2010 Pharmaguy Social Media Award candidates here (pdf).

Aside form the votes and comments that I received via the survey, I also was very much impressed with a presentation Alex made in September at the DigiPharm conference in London. He talked about the launch of Janssen UK’s Psoriasis 360 Facebook page (see “Markets as Conversations: Can You Have a Discussion with ‘Psoriasis 360’ on Facebook?“).

When I handed over the Hawaiian shirt to Alex, I stated that another important factor in my decision was that Psoriasis 360 is the first consumer-oriented pharma FaceBook page to allow comments without pre-moderation. All comments are posted first and then reviewed afterward. So far, only a few comments had to be removed — mostly because of vulgar language or mentions of product names. If a comment includes a product  name, the moderator(s) ask that the comment be resubmitted with the product name removed.

Psoriasis 360, however, may NOT be the FIRST pharma Facebook page that allowed unmoderated comments to be posted. Sanofi-Aventis’ VOICES Facebook was probably the first, but only unintentionally! Listen to that story and its aftermath here: “What Sanofi-Aventis Learned from Its FaceBook Experience & What the Experts Recommend It Do Now“.

Also, after I made my presentation, Joan Mikardos, Senior Director, Business Innovation, Sanofi-Aventis, reminded me that another S-A Facebook page — “THE COALITION TO PREVENT DEEP-VEIN THROMBOSIS (DVT)” — which was launched BEFORE Psoriasis 360, also allows unmoderated posts.

Actually, the DVT Facebook page is technically owned by “The Coalition to Prevent Deep-Vein Thrombosis (DVT),” which is “funded by sanofi-aventis U.S. LLC,” as revealed on the Coalition’s .org site (see http://www.preventdvt.org/). The “about” page of the site states “In February 2003, more than 60 organizations assembled at the Public Health Leadership Conference on Deep-Vein Thrombosis (DVT) in Washington, D.C. to discuss the urgent need to make DVT a major U.S. public health priority.”

Technically, therefore, the DVT Facebook page is not a true S-A site, unless the Coalition is just a front for S-A and not a coalition at all.

Whatever the true provenance of the DVT Facebook page — a topic I may blog about at some other time — my award was not a contest to determine who did what first. It is more about people such as S-A’s Dennis Urbaniak, who is a bona fide social media pioneer and who received recognition as such in my award “unceremony.”

Pay It Forward!
What will happen now? Will another pharma social media pioneer receive another Hawaiian shirt next year?

There WILL be another award, but NOT another shirt. As Alex said in his Pixels & Pills interview, he is now the custodian of the Hawaiian shirt, which he will pass on to the next deserving pioneer a year from now. Just like the Masters green jacket! Meanwhile, keep those nominations coming by taking my survey here.

Proper Care and Handling of the Shirt
Alex and any future Pharmaguy Social Media Pioneer custodians of the Hawaiian shirt award have an obligation to maintain the shirt in its original condition. Here are a few proper care suggestions: