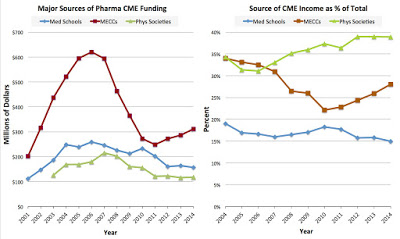 According to data compiled by the Accreditation Council for Continuing Medical Education (ACCME), the pharmaceutical industry has increased its financial support of CME in 2014 compared to 2013. This is the first time in seven years that Pharma’s support has increased.

In the chart below, I plotted the Growth vs. Decline of Pharma CME Support from 1999 through 2014. I include monies paid for advertising and exhibits at CME events and assume 100% of this activity comes from manufacturers (drugs and devices). Based on this, the drug and device industry support for CME has increased by about 3% in 2014 vs. 2013 ($1.031 Bn vs. $1.00 Bn).

Even though the data suggest that pharma’s support of CME took a nose dive from 2008 through 2012, CME income from “other” sources took up the slack and then some beginning around 2010-2011. Total CME income increased 13.6% from 2011 through 2014, whereas drug industry support dropped about 3% during that time.

Where did this extra money from “other” sources come from?

First, take a look at the following charts, which show the contribution of CME income from different categories; i.e., commercial, advertising & exhibits, and “other.”

According to the ACCME, “examples of income from other sources include participant registration fees, government grants, private donations, and allocations from a provider’s parent organization or other internal departments.”

The annual report does not break down income from other sources, but I suspect that at least some of that income originated from the drug industry through grants made to medical societies and private medical education communication companies (MECCs). These grants may not be included in the  “commercial” support category. It’s no coincidence that contributions from MECCs have increased every year beginning in 2012 as shown in the following charts:

According to an MM&M article (here), “a report last year in Modern Healthcare had predicted that the drug and device industry could begin shifting their promotional budgets toward CME and away from direct promotional programs, due to a detail in the federal Sunshine Act, a provision in the Affordable Care Act, that allows them to evade disclosure as long as the sponsor is blind to the recipient.

But the CMS last year reversed course, saying it intended to eliminate the CME carve-out. The 21st Century Cures legislation, which is set to be debated on the House floor shortly, would put the CME exemption on firmer footing.”

For more about “hiding” pharma’s support of CME, read “ACCME’s Dirty Little Commercial Funding Secret.” Also, all the charts here have been arranged in a single infographic, which can be found here.