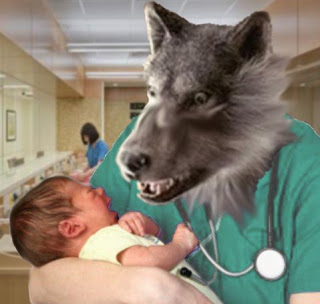 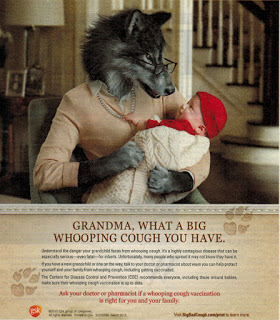 GSK’s Big Bad Cough multimedia campaign focuses on a grandma putting her baby grandchild in range of catching whooping cough from her: “Understand the Danger Your New Grandchild Faces.” The print ad shown here appeared in a recent Parade magazine insert in my Sunday paper. You can also view the TV Ad here)if it still available online.

According to GSK’s PR/marketing earned media machine: “Adults have historically low vaccination rates. For Tdap, the combined diphtheria, tetanus and pertussis vaccine for grown-ups, only 17% of adults over age 19 are up-to-date, according to recent CDC [Centers for Disease Control]  data. GSK said grandparent vaccination rates are even lower, coming in at below 10%. Adults are the most common carriers or “spreaders” of pertussis to infants, according to the National Foundation for Infectious Diseases” (see here).

The takeaway message is that grandparents are that danger. But, there’s something you should know.

Firstly, GSK’s approved pertussis vaccine — BOOSTRIX — is approved for use in adults 65 years of age and older. Thus, GSK must market only for that use even though the CDC says that expectant mothers can provide “the most protection to your baby by getting the whooping cough vaccine during pregnancy and making sure your baby gets her whooping cough vaccines on time.”

Data from the CDC show that the number of whooping cough cases is increasing, but the incidence in people over 20 years of age is very low. 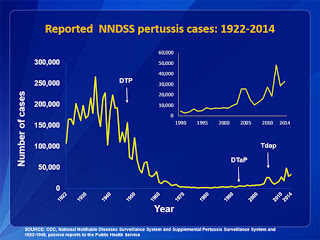 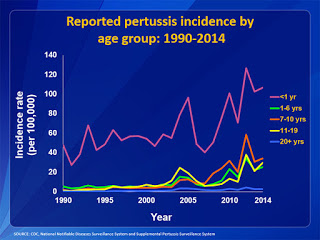 According to the Well health blog (here), 83 percent of healthcare workers (nurses and doctors) had come to work while sick at least once in the past year, even though almost all believed that working while ill can endanger patients.

So, why doesn’t GSK show a nurse in wolf’s clothing in its Big Bad Cough multimedia campaign? Like this:

In a study of health care workers, unrecognized pertussis infections (diagnosed by serology) were common, with an average annual rate of infection of 33% (here).

“GSK research with grandparents found that they have a very low awareness that whooping cough was a serious danger to infants, said Brian Gartside, marketing director, integrated customer experience at GSK. While grandparents understood their own risks with whooping cough, he said, GSK found only 2% were aware of possible consequences to infant grandchildren” (see here).

Obviously, it’s not a good idea for pharma to vilify its healthcare clients, but quite OK to portray consumers as villains AND instill in new grandparents feelings of guilt!

Fear tactics seem to be the choice marketing strategy for all vaccines. When the consumer/patient is portrayed as the victim, it’s no wonder so many people are turned off to vaccines!

GSK should advise expectant mothers to ask their doctors and nurses, “Have you been vaccinated against measles, mumps, rubella, influenza and whooping cough?” Instead, new moms are going to focus their angst on their parents!

In any case, pharma marketers should not vilify any stakeholder group be it patients, grannies, or nurses.