According to a Newsweek online article, “A growing number of doctors and medical centers are shutting the door on freebies from big drug companies” (see “Saying No to Big Pharma“).

Newsweek quoted IMS Health data for 2004 and claimed that pharmaceutical companies spent about $7.3 billion on “free lunches and pens” for physicians that year. Here’s the exact quote:

“Drug companies spent another $27.7 billion on promotion, including $15.9 billion on free drug samples and $7.3 billion on sales-rep contacts (free lunches and pens), $4 billion on direct-to-consumer advertising and $500,000 on journal advertising…”

The $7.3 billion figure is likely to be repeated in many blogs and other critical pieces (for example, see the recent post on this topic in PharmaGossip). The problem is that Newsweek is purposely misleading its readers and I’d like to set the record straight.

Newsweek has mislead its readers (and some bloggers) by parenthetically qualifying “sales-rep contacts” to mean “free lunches and pens.” This implies that $7.3 billion was spent only on free lunches and pens for physicians, which is patently impossible! And this is from someone who is not a big fan of this type of promotion to physicians as any regular reader of this blog can attest (see, for example, “Gifts That Keep on Giving“).

$7.3 billion works out to about $11,000 per physician! That assumes each physician in the US received the same piece of the total pie as it were. If you apply the 80/20 rule of physician marketing, which states that 80% of promotional spending goes to the top 20% of prescribers, then each high prescriber would receive $43,000 worth of free lunches and pens.

So, how much is actually spent on free lunches for physicians?

A while back I quoted a figure that suggested that each of the 90,000 or so pharma sales reps has a monthly physician lunch budget of $2,000 (see “Free lunch for patients! Why not?“). That works out to only about $2.2 billion for pharma’s physician free lunch program. Eli Lilly claims the real monthly budget per rep is only about one-quarter to one-third that amount. Let’s compromise and use $1.1 billion as the best estimate. That’s 15% of the total sales rep promotional budget (not including samples), which is not an unreasonable amount. 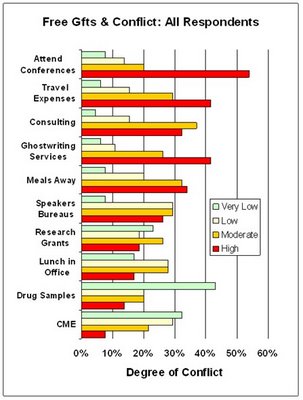 Other Freebies
Of course, the $7.3 billion is what the industry spends on all sales rep activity, not including cost of dispensing samples. Newsweek is being grammatically incorrect — but politically correct — by parenthetically qualifying “sales-rep contacts” to mean “free lunches and pens.” Sales-rep contact includes other expenses like wages, bonuses, car, rep expenses, and most importantly, sales aids and other promotional items/expenses. The latter may include physician “freebies” like compensation to attend conferences, consulting fees, ghost writing services, etc.

These other “freebies” are what really influences physicians to prescribe the drugs of the gift givers.

In a recent Pharma Marketing News online poll, respondents were asked to rank various “gifts” to physicians in terms potential conflict of interest. The results are summarized in the chart (left). You can also access an interactive summary of the results or read opinions of experts in the article: “Free Gifts to Physicians: What’s the Big Deal?“

It’s a shame to frame this topic as “free lunch and pens” when the issue is much more complex than that. Lunches and pens involve little conflict of interest compared to payment for “consulting” and other “freebies” according to poll cited above. It is obviously convenient for Newsweek not to do any fact checking and to mislead readers to believe that $7.3 billion is spent on free lunch and pens for physicians. It makes for good proselytizing, but not good reporting.

While we’re on the subject of free lunches for physicians, feel free to participate in the following poll: