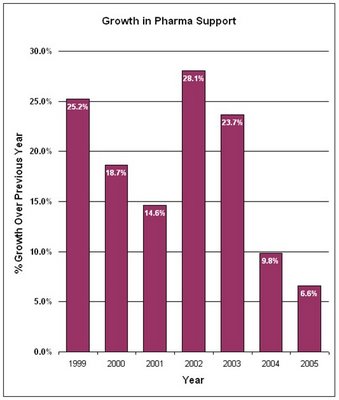 2005 marks the third consecutive year of decreased growth in commercial support of continuing medical education (CME) by the pharmaceutical industry, according to the 2005 annual report of the Accreditation Council for Continuing Medical Education (ACCME), which collects this data from accredited CME providers.

Not since the market bust of 2000-2001 has pharma support slowed, and not as dramatically as in the last two years.

In 2004, pharma support for medical school based CME was at an all time high of $249 million. In 2005, that dropped to $239 million. Pharma contributions to physician societies for CME has remained flat at about $168 million.

This could be in reaction to calls from the medical community that medical schools stop accepting “free gifts” from pharmaceutical companies and that grants for CME from pharma be contributed to a general fund rather than to individual physicians (see “Gifts That Keep on Giving“). We could be witnessing payback by the pharma industry.

Education vs Lunch
Last week I posted some estimates of the amount of money the pharmaceutical industry spends on providing free lunches to physicians (see “Free Lunch for Physicians: Newsweek Misleads“). Based on 2004 data, I estimated that the industry spends $1.1 billion on its free lunch program for physicians. Using data about the total budget for sales reps in 2005 of $11 billion — a number supplied by a commenter to the above post — I estimate that the free lunch program cost the industry $1.65 billion in 2005 (this assumes that the percentage of a rep’s budget spent on lunch has remained constant at 15%). This is about $500 million more than the industry spends on CME.

It’s good to see where the priorities are.