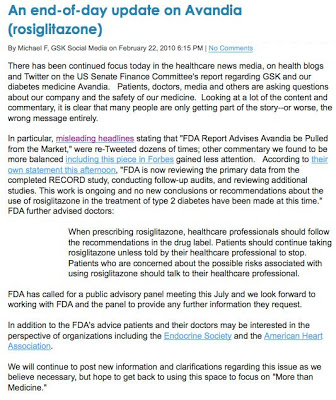 GSK continues to use its “More Than Medicine” blog to focus on Avandia, one of its medicines receiving a lot of attention recently (see Steve Nissen to GSK (and FDA): “Put Patients First! It’s Time to Pull Avandia from the Market.”).

In an early-evening post yesterday, blogger “Michael F”, complained of the “misleading headlines stating that ‘FDA Report Advises Avandia be Pulled from the Market,'” which he noted “were re-Tweeted dozens of times.” Then he pointed out that other commentary, which GSK found to be “more balanced” gained less attention.

Michael F cited “this piece in Forbes,” as his example of a “more balanced” account (see here or screen shot below in case they delete or edit the post; click for enlarged view).

It’s a faux pas to cite an opinion of a physician who was on your payroll as a consultant and speaker. As Ed Silverman over at Pharmalot pointed out, GSK paid Dr. Mintz $11,050 in the first quarter of 2009, something that Forbes originally neglected to point out (see “A Forbes Guest Blogger And His Pharma Ties“).

Silverman noted that the Forbes oversight was corrected Monday when Forbes “placed an editor’s note on blog posts Mintz wrote over the past few days about Avandia and Advair, among other drugs, indicating his ties to various drugmakers.”

Perhaps Michael F did not see that editor’s note when he said that Dr. Mintz offered a “more balanced” point of view? Or maybe Michael F feels that Dr. Mintz could have a balanced point of view on this subject despite having been on GSK’s payroll. That could be, but you should not use such a person as your spin poster boy!