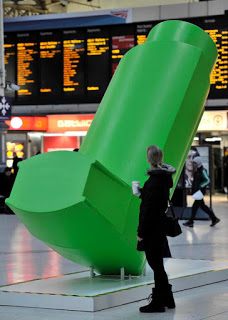 I should be in Philadelphia today attending CBI’s iPharma conference, but I think I have the flu despite getting the flu vaccine, which I recently learned is only 62% “effective” (see here). Well, “effective” means it will keep me from seeking medical treatment, but unfortunately, it won’t keep me from missing this conference.

If I were in Philadelphia, however, I may pass by the famous Claes Oldenburg Clothespin outdoor sculpture in front of cit hall on my way to the conference. You’ve probably seen it yourself: 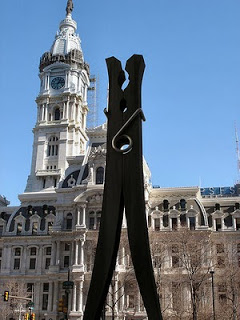 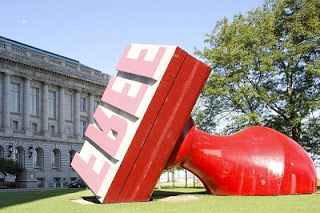 “Many of Oldenburg’s large-scale sculptures of mundane objects elicited public ridicule before being embraced as whimsical, insightful, and fun additions to public outdoor art,” according to a Wikipedia entry.

GSK recently launched a recycling program that includes an “Oldenburg-esque” large-scale sculpture of a mundane object — a metered dose inhaler! Here is a photo of the sculpture in Victoria Station, London:

“Today sees the launch of the first ever UK-wide inhaler recycling and recovery scheme – Complete the Cycle,” announced GSK on Facebook. “The scheme encourages all inhaler users to return old devices to a participating pharmacy rather than send the devices to landfill.”

“Our inhalers produce 5.2 million tonnes of CO2 emissions, and are the second biggest contributor to our global footprint – just after the transportation aspects involved in making and supplying our products around the world,” says GSK (here).

The sculpture seems like it is capturing minimal attention from Victoria Station visitors of which there are 1.5 million per week! The photo shows one person eying the sculpture wondering what the hell it is?

But it’s not the inhaler itself that contributes to GSK’s global carbon footprints. 95% of the footprint produced by these inhalers is a result of the propellant it releases into the atmosphere. Even Claes Oldenburg would be challenged to sculpt propellant!

P.S. Why green? I think the actual inhalers come only in beige like old-style personal PCs. Claes would not approve!