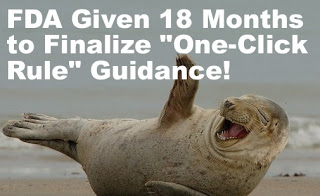 On May 20, 2015, Rep. Billy Long (R-Mo.) introduced to the U.S. House of Representatives a bill (H.R. 2479) that would “direct the FDA to clearly regulate meaningful, truthful and non-misleading communication of product information on social media.”

Specifically, the draft of the bill (find it here) states that the FDA should revise its regulations and guidances to “recognize that [sponsors of medical products] may use the Internet to:

This, of course, is the “one-click rule,” which has been hotly debated for years in pharma marketing circles. In fact, I was among the first observers to point out that the “one-click rule” as described above should be allowed. Let me explain…

In a presentation at a 2006 eyeforpharma eCommunications and Online Marketing conference, a Google operations specialist discussed how to create effective Google AdWords. She suggested an example drug AdWord that included both the trade name of the drug (in the URL) and its indication, but did not include a direct link to the package insert or other risk information.

One attendee from a pharmaceutical company contended that such an
ad may pass muster with the FDA because the package insert or brief summary is “one or two clicks away.” Actually, it would be two clicks away because the AdWord linked to the drug.com home page, which in those days did not always include risk information but provided a link to package insert.

An AdWord could be said to comply with the “one click rule” only if within the AdWord text there was a direct link to the package insert (PI) or brief summary.

At that time I said: “It is a shame that the FDA does not have any guidance for the industry as far as Internet advertising is concerned. In this case, however, I think the issue is clear. Any AdWord that mentions a product by name plus the indication, must also include a direct link to the PI within the ad itself” (see The “Girl from Google”).

Long’s bill would give the FDA 6 months to issue revised draft guidance and only 18 months to publish FINAL regulations and guidance “addressing the matters described in [H.R. 2479].” ROFLMAOYSST (Rolling On the Floor Laughing My Ass Off Yet Still Somehow Typing).

It Was Politics That Killed Avandia, Says Glaxo