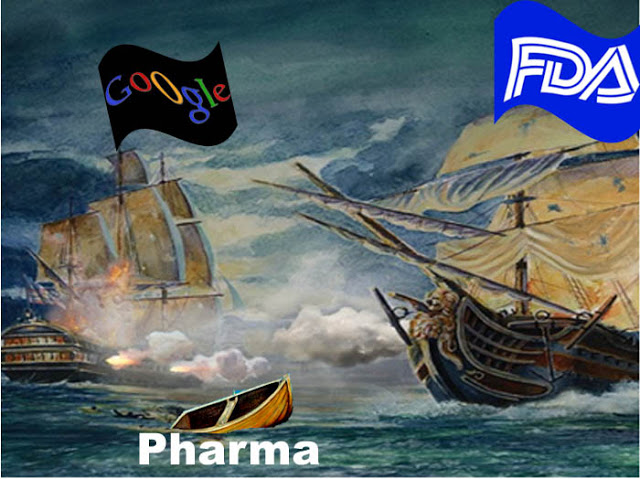 “…something is happening here and you don’t know what it is, do you, Mr. Jones?”

That’s how I’m feeling today as I try to understand what’s really behind the news about Google’s advertising policies, online pharmacies, and FDA’s 2009 warning letters to major pharmaceutical companies. If my thinking is correct, drug industry search engine ads were “collateral damage” in a war between Google and the FDA.

Yesterday, the Wall Street Journal reported that Google is “close to settling a U.S. criminal investigation into allegations it made hundreds of millions of dollars by accepting ads from online pharmacies that break U.S. laws” (see “Google Accepted Ads from Illegal Online Drug Stores”).

Not so coincidentally, a few days ago, Google disclosed that it was setting aside $500 million to potentially resolve a case with the Justice Department (DOJ) that involved “the use of Google advertising by certain advertisers.”

“The investigation has examined whether Google knowingly accepted ads from online pharmacies, based in Canada and elsewhere, that violated U.S. laws,” said the WSJ article.

The FDA has long struggled to rein in American’s penchant for buying drugs from online Canadian pharmacies and this investigation of Google by DOJ is likely part of that effort. But, as I surmise below, caught up in the case may have been legitimate major pharmaceutical companies as well.

Consider FDA’s infamous 14 warning letters that the agency mysteriously sent in a single day in March, 2009, to major pharmaceutical companies about Google Rx Adwords, saying the ads were misleading because they didn’t include risk information (see “FDA Warns Drug Firms Over Internet Ads”).

Could that have been a “ploy” to bring Google to its knees and cave in regarding online pharmacy ads?

In other words, the FDA’s warning letters may have been a “shot across Google’s bow,” intended to force Google to halt its acceptance of ads from “illegal” online pharmacies. FDA could have been saying, “What’s more important to you? Ads from online pharmacies or ads from major pharmaceutical companies?”

It’s likely that this case goes way back because in September 2010, Google disclosed that it had filed a lawsuit against “advertisers we believe have deliberately broken our rules,” in particular involving “rogue online pharmacies” that “illegally sell drugs on the Web” (see “Google’s $500M Charge Related To Pharma Advertising Probe”).

In June 2010, I reported that Google launched a NEW Rx drug ad format that includes everything FDA requires that a drug company include in its direct-to-consumer advertising: fair balance, and direct links to side effects, precautions, dietary information, etc. (see “Finally, A Google Drug Search Ad Format That Has All FDA Could Want… But Pharma Can’t Use It!”). The “ads” are really more like public service announcements. They come from National Institutes of Health (NIH) and compete with paid ads from pharmaceutical companies who cannot use the new format (see “Google’s New OneBox Rx ‘Ads’ Steal Clicks from Organic Branded Rx Search Results”).

To compensate for that deficiency, Google also has come up with a new ad format for the industry (see “Is Google the New FDA?”).

All of these actions by Google could be designed to appease FDA and DOJ and regain the drug industry’s ad revenue lost as a result of FDA’s warning letters way back in 2009.

You have many contacts among the regulators
to get you facts when someone attacks your advertising
but nobody has any respect, anyway they already expect
you to all give a check to FDA and other organizations
Ah you’ve been with the professors and they’ve all liked your looks
With great lawyers you have discussed clicks and sidewikis
You’ve been through all of Ayn Rand’s books
You’re very well read, it’s well known
But something is happening here and you don’t know what it is
do you, Mr. Pharma?

Big Inside Joke About Doctor Surveys: 90% of Physicians Believe They...