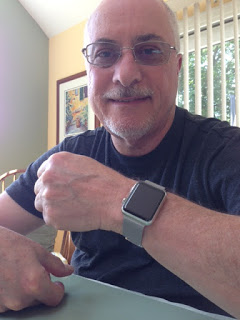 I’ve had my Apple Watch for about a week and I am beginning to grow attached to it (literally and figuratively). As I recently said on Twitter, paraphrasing actor Jonathan Goldsmith who portrays the “Most Interesting Man in the World” in Dos Equis beer commercials:

“I don’t often wear a watch. But when I do, I prefer Apple Watch,” says the most interesting PharmaGuy in the world. “Stay digital, my friends!”

At first, I thought I’d wear the watch all day just to see how long the battery lasted. At least one person I know returned his Apple Watch because the battery did not last long enough.

But I haven’t had that problem. At the end of the day, my watch has at least 68% charge remaining.

Maybe that’s because I’m not constantly using it to take self-portraits like the one shown here. Which is really cool, BTW.

How did I do that?

Easy. As with all functions on the Apple Watch, it needs to be synced with your iPhone and works in tandem with the iPhone. There is no camera in the watch, but it controls the camera in your iPhone. For my self-portrait, I propped my iPhone against a glass on the table, clicked the 3 sec button on the Apple Watch, struck a pose, and click – a photo was taken. Note that both my hands are free and are not required to hold the iPhone on a selfie stick. I have to think of other ways to use this app.

I use the Apple Watch for more useful tasks such as checking my email, text messages, tweets, etc., without having to unlock my iPhone or take it out of my pocket. I’m probably not as important as all the people I saw last night milling around during intermission at the Walnut Theater in Philadelphia.

Practically everyone had their noses stuck near their iPhone screens walking around like zombies. I merely held up my watch to do practically the same things they did, except I did not look so pretentious and idiotic.

One thing I don’t do is use my Apple Watch to compose tweets, messages, and email. To do that, it’s best to talk to Siri, which is not something I’m going to do in public. It is cool, however, to make and accept phone calls via the watch. It’s just a bluetooth technology, but very Dick Tracyish 🙂

I also use the fitness/activity app to measure my activity throughout the day. Although it does a number of things, the most useful for me are the gentle reminders to stand up, take a walk, etc. When I do that and when I meet my goals for the day, it congratulates me. This immediate feedback is not something available in things like the fitbit or whatever you call that thing you put on your wrist that looks ugly and can only do one thing!

I’ve tested adherence apps on my iPhone, but I think they will be much more effective as Apple Watch apps.

Unfortunately, not many people will be able to afford an Apple Watch. And I thought it was an extravagant purchase that would never be justified. My view on that, however, has changed. I estimate the watch will pay for itself in one year if I just use it to make and accept calls without having to find where I left my iPhone or having to unlock the thing. Plus, I get to wear a good-looking watch, which is something I didn’t often do before.