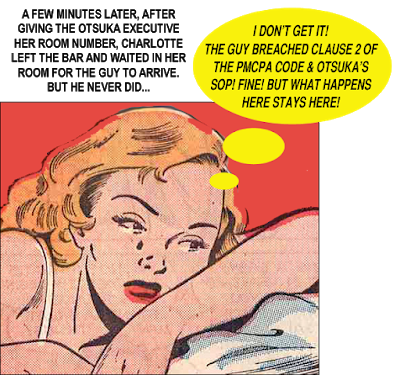 According to the UK’s Prescription Medicines Code of Practice Authority (PMCPA), which oversees the self-regulatory code of the Association of the British Pharmaceutical Industry (ABPI), “An anonymous, non-contactable complainant alleged that a male employee of Otsuka Pharmaceuticals (UK) behaved inappropriately and provided inappropriate hospitality following a dinner at a meeting partly funded by the pharmaceutical industry.

“The complainant stated that he/she went from the private function area at a hotel where dinner had been held to the public hotel bar and noticed three Otsuka employees. Descriptions were provided. A female health professional, who the complainant remembered as being very drunk at the dinner, subsequently entered the bar and started talking to the Otsuka employees. Although she was obviously intoxicated a male Otsuka employee continued to ply her with drinks; his two female colleagues seemed unhappy with this” (see “AUTH/2752/3/15 – Anonymous v Otsuka“).

Otsuka did not deny that the senior employee spoke to a woman in the public bar nor that “she was flirtatious and tactile.” [You gotta love the pharma industry! It has no problems talking about erections on TV, but sexual encounters in real life must be described in clinical terms such as “tactile.”]

The document goes on to describe in some detail what happened that night, which sounds like something straight out of a True Romance comic. Here’s my graphic depiction of the suave style of the Otsuka executive: 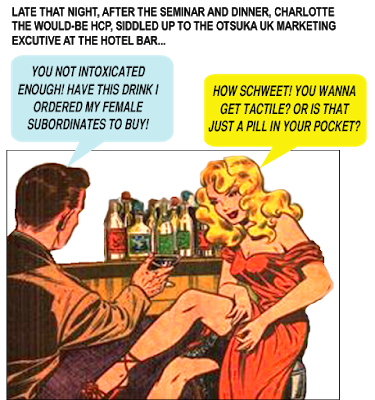 You won’t believe what happened next.

“During the evening the
body language between the male and the health
professional became more intimate and flirtatious,” says the PMCPA account. “Eventually after a number of drinks having being
bought by the male in question for the female health
professional they left the bar within minutes of each
other.”

It turns out that the Otsuka women managers bought the woman 3 drinks at he behest of their male boss: two glasses of wine and one glass of water. A glass of water? Whaaa? Actually, these women were pissed at the guy’s behavior and at least one of them — probably the one who bought the glass of water — lodged the complaint with the PMCPA.

Otsuka tried to weasel out by claiming the intoxicated, flirtatious woman was not a healthcare professional and therefore the Code of Practice was not breached: “Although there was consistency in the accounts that
the woman was flirtatious and tactile,” said Otsuka,” the evidence
of how the senior employee behaved towards her
was inconclusive and neither the complainant nor
the Otsuka employees present heard any of the
conversation between the two parties. Accordingly,
there was no clear evidence that he acted
inappropriately.”

The PMCPA did not buy that argument. The Panel noted that the provision of hospitality
and other interactions between the pharmaceutical
industry and health professionals outside the formal
meeting proceedings was a subject that attracted
much public scrutiny and criticism (see, for example, “Novartis Wines — er, Beers — and Dines Docs at Hooters!“).

The
Panel considered that overall the matter brought
discredit upon and reduced confidence in the
pharmaceutical industry.

When It Comes to Privacy, Purdue Is as Old-fashioned as an...