Every day, I get a synopsis of tweets and newsfeeds from selected pharma companies that I am following (see “News Direct from the Pharma Industry“). Lately, I’ve been noticing a number of tweets from Johnson and Johnson (@JNJComm) that are direct responses to complaints from consumers about its products. In some cases, complainants have had an extended conversation with JNJ.

@hiltmon (Hilton Lipschitz) complained about an Acuvue contact lens problem in a tweet posted to @JNJComm. @hiltmon said: “@JNJComm, could you please fwd this to Acuvue team: See the hole in the lens (top right), happened twice now. Thanks. pic.twitter.com/50ML8IrT” The link leads to this photo: 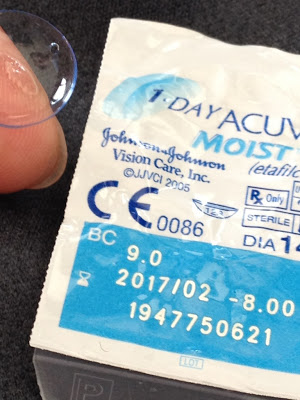 Whether or not this could be classified as a legitimate “adverse event,” is a matter for debate, but JNJ responded as if it were: “thanks for alerting use. Please call us at 800-843-2020. It’s important that we fully understand what occurred. Thanks! ^DE” Here’s a screen shot of the full exchange: 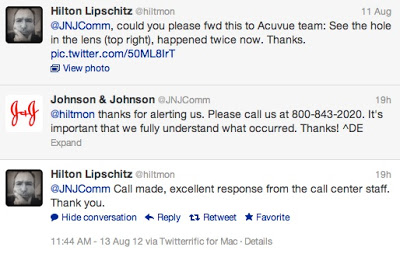 I am not sure what “^DE” means. It appears that JNJComm uses it only at the end of responses to these sorts of complaints. I assume it allows some kind of tracking or followup. [Actually, it indicates the author – in this case Devon Eyer; see UPDATE at the end of this post.] In any case, the end result was one happy (I assume) customer.

The above Twitter conversation might be considered a “brand conversation,” which is what brand marketers would like to see (although they would like positive rather than negative conversations about their products). So, JNJ corporate communications people are having these brand support conversations via Twitter, but the brand people — who presumably manage the FB page — do not. That’s telling in respect to the question I asked in a previous post: “Who’s Your Social Media Daddy?“

This conversation is somewhat hidden from most of the nearly 20,000 @JNJComm followers. As I mentioned above, it does not appear in @JNJComm’s Twitter timeline because each tweet begins with “@”. That makes it a personal conversation in Twitter. Unless you access @JNJComm’s Twitter RSS feed as I do, you won’t see these tweets. That’s unfortunate, IMHO, because it means that the power of social media (e.g., sharing content with followers) is sidestepped. In this case, other consumers may not learn about important safety and other information about Acuvue lenses. Public health would be better served if everyone could learn from the conversation (e.g., the batch number of the faulty lenses).

Of course, it also means that these conversations may not be picked up by the media — presumably the main audience for @JNJComm and other pharma corporate Twitter accounts — or by regulators who may like more information about faulty medical products.

I have included Devon in my list of contenders for the 3rd Annual Pharmaguy Social Media Award. You can learn more about this award here and/or vote for your favorite here.