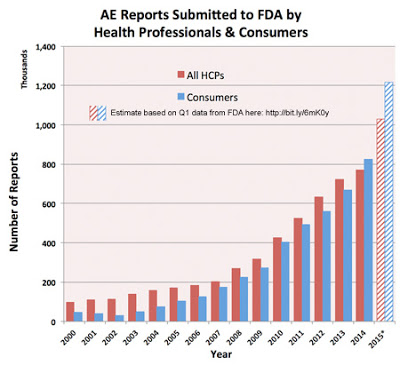 I’ve been tracking the number of adverse event reports (AERs) submitted to the FDA over the years based on data supplied by the FDA here. The latest update of that data was made in November 2015 showing the number of AERs FDA received in the first quarter (Q1) of 2015.

If you assume that the submission rate seen in Q1 of 2015 remained constant throughout the year, you get the following trend chart based on FDA’s summary data table:

According this analysis, about 2.25 million AERs were submitted by healthcare professionals (HCPs) and consumers in 2015. An analysis by the Milwaukee Journal Sentinel and MedPage Today, however, yields drastically different numbers.

According to that analysis only 1.19 million AERs were submitted to the FDA in 2015 (see embedded story at the end of this post). That’s only half of what I find based on my analysis.

I’m not sure why there is this discrepancy. Perhaps the Sentinel analyzed the raw quaterly data files found here. But that doesn’t make sense because 2016 data are available on that page, but the Sentinel said “Numbers aren’t final for 2016,” which implies it did not use the quarterly data.

Whatever! Adverse event reporting is at an all-time high and growing.

“We are concerned,” said Michael Carome, deputy director of Public Citizen’s Health Research Group. “It reflects that the FDA has allowed drugs to come to market without adequately ensuring safety.”