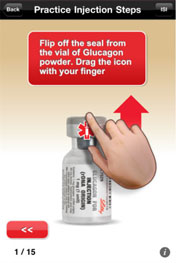 “The Lilly Glucagon Mobile App is a tool to teach how to use Glucagon for Injection, through simulated practice. Glucagon, 1 mg (1 unit), is indicated to treat severe hypoglycemia (low blood sugar). Severe hypoglycemia due to insulin may result in loss of consciousness (insulin coma). The app is designed to help people be more prepared, and also provide an opportunity to store locations and expiration dates of their Lilly Glucagon Emergency Kits. The Lilly Glucagon Mobile App is now available on the iTunes® store as a free download for iPhone® or iPad® mobile devices.”

The app includes an animated video showing caregivers how to administer the drug, which is not an easy thing to do.

This is the second BRANDED mobile app that I am aware of. The first was Pfizer’s Recipes2Go app launched in May, 2012. The app promoted the Lipitor $4 co-pay card and used recipes to entice users into downloading the app. That app has since disappeared after I reported that the promo page on the iTunes store was, in essence, an direct-to-consumer ad for Lipitor. The page mentioned Lipitor and its indication (treatment of high cholesterol) but failed to include the Important Safety Information (ISI) as required by the FDA (read “Pfizer’s Short-lived LIPITOR Branded Mobile App“).

I’m not sure if Pfizer removed the app from the iTunes store because of the complaint I sent to the FDA “Bad Ad” program, or because the co-pay program was a failure (see “Pfizer Throws In the Lipitor Marketing Towel“).

In any case, Lilly’s Glucagon Injection app does not repeat the mistakes made by Pfizer. The iTunes promo page for Lilly’s app mentions Glucagon but does NOT mention the indication (see screen shot below; click for enlarged view or go here). The app also clearly features the ISI and does not require users to scroll down several screens to see it as does the Pfizer app. 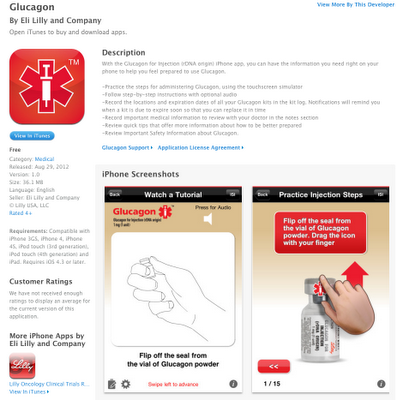 I rate this app an A+ because of the above, but mostly because it is likely to be well-received by caregivers — although the same instructions and animations could be seen on the Web. This is one app that physicians might “prescribe” to their patients’ caregivers, but I also think physicians should download the app on their own iPads to show to caregivers at the point of care.

While the app may rate an A+, the injection technology that it illustrates gets a D- from me. There should be an easier, more automated, one-step way to prepare and administer this product instead of inventing a new technology app to support an old technology medical device!

When Are Third-Party Online Discussions Not Independent of Pharma Influence? Survey...