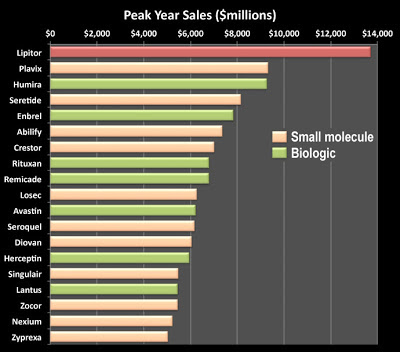 No doubt you’ve heard of how Amgen essentially paid off U.S. Senators to sneak a provision in the “fiscal cliff” bill that delays price restraints on a class of drugs used by kidney dialysis patients, including Sensipar, a drug made by Amgen (see “Big Pharma buys off the Senate“). That “richly embroidered loophole” will cost taxpayers a half a billion dollars.

Although a bill was proposed to close the Amgen loophole in federal law, Amgen and Genentech, which is owned by Roche, are lobbying (i.e., paying) state lawmakers to block generic versions of their products according to the New York Times (see here). Specifically, these companies are proposing bills that would restrict the ability of pharmacists to substitute generic versions of biological drugs for brand name products. “Bills have been introduced in at least eight states since the new legislative sessions began this month,” reports the Times. “Others are pending. The Virginia House of Delegates already passed one such bill last week, by a 91-to-6 vote.”

These crooks, er… biotech companies, claim they are doing this in the name of “patient safety” because the generic versions of biological drugs (so-called “biosimilars”) are not identical to the originals. NOTE: Biosimilars are unlikely to be available in the United States for at least two more years. So, these Biotech lobbying efforts are pre-emptive strikes.

Three of Genentech’s biologics — Rituxan, Herceptin and Avastin — and one of Amgen’s — Enbrel — are among Forbes’ list of “Best Selling Drugs of All Time” (see chart below and here):

“These are really complex, highly sensitive molecules,” said REPUBLICAN State Senator Patricia Vance of Pennsylvania, who plans to introduce a bill. “We want to make sure we are not hurting people.” Sure, especially let’s not hurt the Amgen, Genentech, and Roche stockholders.

Total CME Revenue is Up, But Pharma Support is Down (Again)...