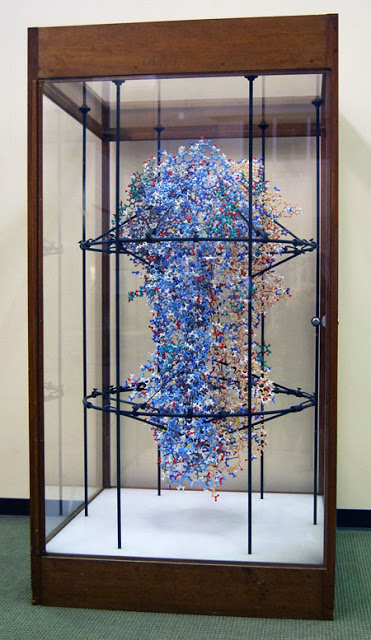 Recently, I’ve been reading a lot about a “universal flu vaccine.” A Bloomberg View piece, for example, points out that the greatest breakthrough in the fight against the Flu, which each year kills as many as a half-million people, including 3,000 to 49,000 Americans, would be “a universal flu vaccine that would protect against all viral strains, eliminating the need for annual and pandemic inoculations. Researchers are experimenting with parts of the virus that don’t mutate in the hope of creating vaccines offering lifelong, or at least years-long, protection.”

This is of great interest to me because (1) I am getting older and more prone to die from the flu, (2) I just learned that current flu vaccines are not as effective as I thought they were or I was lead to believe (see “Does the Flu Vaccine Work? What 62% ‘Effective’ Really Means“), and (3) I was involved tangentially in the research to develop a universal flu vaccine way back in the early 80s!

(The model looks as if it were built yesterday! Damn, am I a good craftsman or what? Kudos to Scripps for the excellent maintenance — it must require dusting every week, I imagine.)

This protein is the key for looking for “parts of the [flu] virus that don’t mutate.”

Ian Wilson’s group has been studying the rare antibodies produced in some people that bind to regions of the virus coat protein that do not change as quickly as the typical targets. “The hope is that these antibodies will be able to recognize many different strains of the virus,” reports MIT Technology Review (see “Why the Flu Is So Relentless, and How Technology Might Help“). “Over the last few years, different research groups have shown that such antibodies can recognize multiple flu strains, and a study from Wilson’s group and the Crucell Vaccine Institute in September 2012 showed that one antibody can recognize strains from both major subtypes of seasonal influenza, more than had been previously shown.”

Back in the 80s, when I built this model, computer graphics were not good enough to help scientists like Wilson visualize the detailed structure of proteins. Here’s how Dr. Wilson describes my tiny contribution to his research:

“We decided we would have a go at building a trimer so we co-opted John Mack from New York who was a model builder. He came up to Harvard [I built a model there first] and we constructed a dimer as one unit. This was a three-dimensional plastic model, 1 angstrom per cm. We could actually look at this thing to see what it really looked like and we could obviously trace it out. There were some limited computer-graphics programs that you could use to trace out the molecule, but it was really hard to get a feel for what it was all like without seeing everything at once. So that (three-dimensional) model turned out to be extraordinarily useful for trying to understand the structure. The third monomer was also built and we thought we would be able to assemble and disassemble the trimer, but they were so intertwined that it was impossible” (see “A Discussion with Ian Wilson“).

It’s great to be a small part of the history of virology, but it would be even better if that history eventually includes the successful development of a universal vaccine for the flu. And this is where the drug industry needs to step in according to Bloomberg View:

“[T]he government has limited means and little product-development experience. Making a new vaccine typically takes a decade and can cost $1 billion. A project of that size is better suited to large pharmaceutical companies. Most, however, have been loath to seriously invest in new vaccines, which offer low returns.

“Given this market reality, the U.S. government should design incentives to get the industry more deeply involved, and it should encourage other countries with manufacturing capability to follow suit. The National Vaccine Advisory Committee should begin by asking industry leaders what it would take. Among the possibilities they should consider: tax credits for research and development costs, fast-track procedures for product approval, extensions for patents and periods of market exclusivity, and financial prizes for scientific breakthroughs.

“By engaging Big Pharma in creating future flu vaccines, governments can ensure that a market failure doesn’t lead to a public health catastrophe.”