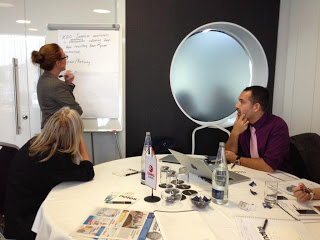 I am attending and presenting at the 3rd Annual Pharma eMarketing Congress in Barcelona (see here) this week. Yesterday, I attended the pre-conference Social Media Training Day workshop presented by Alexandra Fulford and Sven Awege, two people who are pharma social media evangelists.

Many in the audience were new to social media and learned a lot. At the end of the day, workshop attendees were asked break up into groups (see photo on left) and come up with a social marketing plan for a hypothetical drug company and product. They had to consider such things as KPOs (“Key Player Objectives”) and KPIs (“Key Performance Indicators”).

This was the first time I heard about KPOs, so I learned something too. Sven (@SVENNIECO) clarified the origin of KPO in a tweet: “I believe it was McKinsey’s that brought this into Pharma a few years ago, and now we’re all talking Patient Journey, and KPO!!”

This being Europe, the plans could not mention product names, but a major KPI mentioned by at least one group was the number of referrals to the company website — presumably a non-branded disease awareness site.

We may never see real data from any pharma company that tells us how effective social media is in driving traffic to pharma websites, but we do have survey data indicating that ads placed on social media sites are not very effective.

A national consumer survey conducted by Makovsky Health and Kelton (see here), for example, asked consumers about what motivated them to visit a pharma company’s disease-state or drug website for information. According to this survey, the key influencers were a physician recommendation (42%) and news articles (33%). Other drivers of pharma-sponsored website traffic included:

Find more data from this survey in this infographic.

I assume a “social media ad” is an ad placed on Facebook or maybe Twitter. I’ll have to get more details about this survey to find out for sure.

But the survey raises a question that it probably did not explore: Aside from ads, is engagement with consumers via social media effective in driving consumers to pharma websites? I think the jury is still out on that. Social media may help drive awareness of news articles, for example, which then drive traffic to websites. So there’s an indirect KPI associated with social media.

Follow my tweets from the eMarketing Congress via the #FEeMKT hash tag.

The Blog Ate My Job!