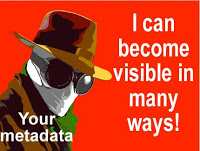 You might recall this post I made three years ago: “Who’s in Charge of Your ‘Invisible’ Metadata? WARNING: Don’t Invoke the ‘Invisibility Rule’“.

In that post I pointed out that Google automatically grabs meta data or “tags” (invisible text that describes the content of the web page) from Rx product web sites when generating the content for natural search results. Meta data text is written by the web developer, but it is visible to the Google search engine, which republishes it verbatim as if it owns the content without getting permission from the web developer.

If you are an unscrupulous pharma marketer, you can use this to your advantage as Pfizer did for Viagra — the viagra.com metadata text is basically an ad for Viagra that does NOT include any fair balance as required by FDA.

The FDA never sent Pfizer a letter regarding the Viagra meta data issue. It did, however, send a letter to Novartis citing violative content in a Facebook “Share Widget” that Novartis created for Tasigna. The widget, like the Google search engine, displayed otherwise invisible meta tags — created by Novartis or its agency — within the widget that appeared on the Facebook pages of people who opt to share the content of the Novartis Facebook page.

FDA said: “The shared content is misleading because it makes representations about the efficacy of Tasigna but fails to communicate any risk information associated with the use of this drug” (see “Implications of FDA’s Warning Letter to Novartis Regarding Facebook Share Widget“). Novartis “corrected” the meta tag to mention only the approved indications, but it still did not include any risk information. As far as I know, FDA did not issue another follow-up letter. Oh Well!

Wendy referenced a Pink Sheet story about AstraZeneca “voluntarily” pulling paid advertising on Twitter due to an inadvertent brand mention (Nexium) in what was supposed to be an unbranded ad. “In our opinion,” said Wendy, “it’s an important example of pharma needing to really pay attention to the details when it comes to new media.” Again, it involves meta tags and Google, which owns YouTube.

An InTouch POV (see here) explains that by “simply adding a few lines of HTML, or meta tags, to web pages, users who tweet links to the content on those pages will have a ‘card’ added to the tweet that’s visible to all of their followers.” The card can contain a lot more than 140 characters. According to the Pink Sheet, AstraZeneca pulled their sponsored tweets on Twitter after being made aware that the unbranded content in their sponsored tweets, which appeared in the Associated Press’ Twitter feed, actually included the name of a prescription drug plus the indication but NO risk information.

You should read Wendy’s post here about this to get the details.

Obviously, AZ won’t be getting a letter from the FDA because it voluntarily pulled the ad. So we don’t know the FDA’s thinking on this. But AZ thought it was violative — after the fact!

Which leads me to ask: Was this ad card reviewed by AZ’s legal/regulatory people? If so, they should have noticed the problem because it is similar to the problem cited in FDA’s famous 14 letters involving (Google) search ads — AZ received one of those letter if I am not mistaken.

“What happened to AZ could happen to any company that did not understand Twitter Cards and what sites or companies were using them. However, had they known that YouTube had placed the Twitter Card meta tags on the AZPurpleZone channel, this all could have been avoided. In fact, AZ could have used this to their advantage and created an even better Twitter experience beyond the 140 character limitations.”

Do We Really Need a Date Rape Drug Marketed for Fibromyalgia?