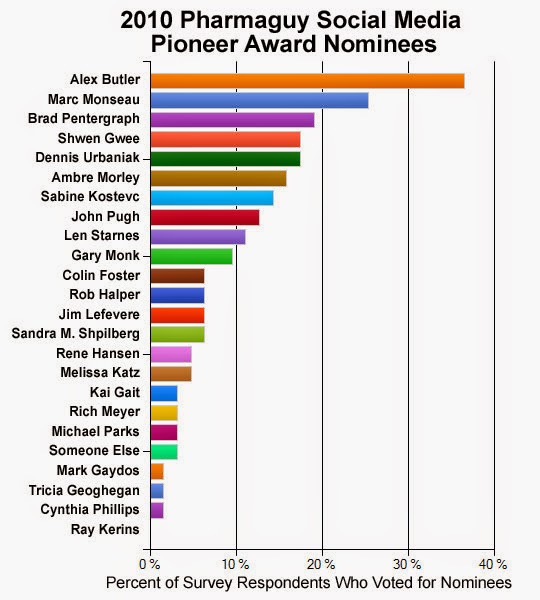 At that time, I presented the following chart showing how readers of Pharma Marketing Blog voted for a list of nominees:

Since then, several people on the list are no longer employees of pharmaceutical companies. Aside from Alex Butler, the “dropouts” include Marc Monseau, Shwen Gwee, Len Starnes, Gary Monk, and Michael Parks.

This year, I put together a list of seven contenders for the 2nd PharmaGuy SM Pioneer Award (see”2nd Annual Pharmaguy Social Media Pioneer Award Goes to...”; vote for your favorite). This year’s list is considerably SHORTER than last year’s! Included on the current list are:

I sincerely hope that I am not jinxing people by including them on my list of award nominees!

Seriously, however, are we witnessing an exodus of SM pioneers from pharma similar to the exodus of interactive pioneers back at the turn of the century? That last exodus presaged the infamous “dotcom” bust. Perhaps the current exodus presages a similar setback for the interactive industry. In any case, there now appears to be a glut of independent social media communications “agencies” out there as these people set up their own shops. Not all of them will be successful, unfortunately.

Just coincidentally I came across this article in the Philadelphia Inquirer: “Rating Pharma on the Steve Jobs Checklist,” which attempts to assess if the pharma sector follows Steve Jobs’ principles. The relevant section is this (I highlighted in bold text the most relevant section):

Jobs’ reflections on his own mortality led him to an insight reached by Jean Paul Sartre and other philosophers. Man’s knowledge of his inevitable demise, something no other animal possesses, provides the spark for understanding one’s purpose. Since our time on earth remains limited, none of it should be wasted on inauthentic pursuits.

Among the modern industries, a high percentage of pharma’s professional workforce began their careers as a result of an individual passion and a sense that their organizations encouraged personal contributions from them. During the recent years of downsizing, however, the sense of alienation among the industry’s workers has grown considerably. Critical thinking, for example, has dissipated in an atmosphere where companies encourage narrow vision, smaller steps, and timid acquiescence to innovation-killing lawyers and soul-chilling finance managers.

Could it be that SM Pioneers inside pharma are feeling “alienated” within their companies, which no longer need their “critical thinking”?

I have often heard from my colleagues who work inside pharma sentiments that support the feeling of alienation in the wake of mergers. These people have often praised my “critical thinking” on issues — ideas that they themselves would love to espouse if only they could and also keep their jobs.

Let me end with a personal note I just received from Alex Butler:

“The time has come for me to hand the shirt [symbol of Pharmaguy SM Pioneer Award] on to a new recipient, I doesn’t seem like a year ago I was awarded the Pharmaguy award with the famous Hawaiian shirt by John. So much has happened, the landscape has changed tremendously in that short 12 months. I always believed that social media and digital technology has the capacity to revolutionise healthcare, I think we can start to see what the possibilities could be. Whether it is the ability for people to bring their data together to change a civic culture and place translational medicine on fast forward, or simply giving people a greater voice and a chance of informed partnership in the management of their health.

The new economy in pharma companies will be the passionate dedicated people who are prepared to change not just tactical implementation of ‘social platforms’, this does not make a social business. I have been very proud to work in pharma for over a decade and very proud to work for J&J. I am sure the new Pharmaguy pioneer will have the same passion and hopefully will inspire more people within pharmaceutical companies to open up the research and development, clinical trial recruitment and management right through to communications and the broader relationship pharma has with the outside world. We can also develop a new more successful marketing model. I congratulate the winner and look forward to another 12 months of social business development in pharma.”