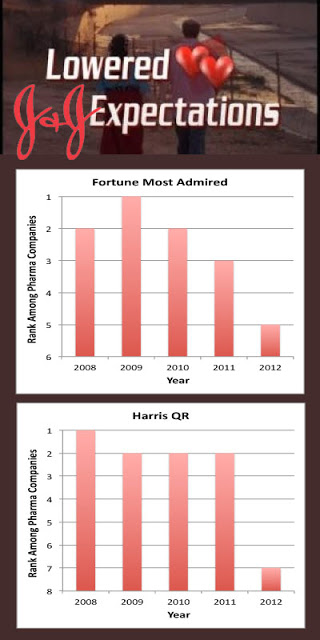 #JNJ is pleased to rank 12th among @FortuneMagazine’s most admired companies! > cnnmon.ie/xM27z8

Hmmm… JNJ might be pleased that #12 is better than #17, which is where the company stood in last year’s most “admired” list of companies.

However, when you look at JNJ’s standing within the pharmaceutical industry, you see a different, ie, downward, trend as shown in the chart on the left (click on it for a larger view). A similar trend is seen in the Harris QR data.

So, I don’t think JNJ should lower its expectations and be “pleased” with how it is performing against its competitors who are certain to leverage this loss of reputation to their advantage.